Darkmatters Review: Man On A Ledge 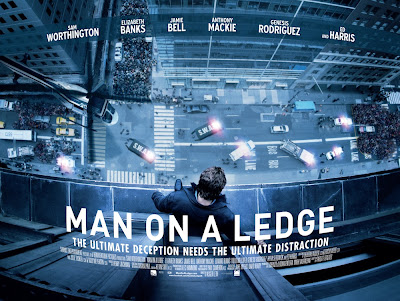 So there’s a man right – we’ll call him Nick (Sam Worthington looking for all the world like a B-movie version of Mel Gibson). Nick is a good guy, an ex-cop who is on the run as a fugitive because he was set up by an evil property magnate - David Englander (a eye wateringly OTT Ed Harris).

And then there’s this ledge right… No, not a ‘legend’ like Ryan Gosling in Drive but an actual ledge as in the thin decorative element that runs around the edge of a Manhattan hotel.

Put the man and the ledge together – throw in a sexy police psychiatrist named Lydia (Elizabeth Banks), an even sexier thief named Angie (Genesis Rodriguez) – and watch the ensuing negotiation thriller unfold.

Man on a Ledge isn’t a terrible film but it is an entirely disposable one.

I saw this in a double bill with Chronicle and of the two there is only one that I really remember all that much about… and it wasn’t the one with the ledge in it. So if you have some time to kill and fancy seeing an innocent man using every cliché in the book to try and clear his name – Man on a Ledge could be just for you. And if the ledge doesn’t get a best supporting actor nod it will only prove that the Academy always overlook talented by non-sentient props (as proved by Alec Baldwin in 2003 for ‘The Cooler’).

Be sure to look out for the potential sequel – 'Man Not On A Ledge Anymore'!