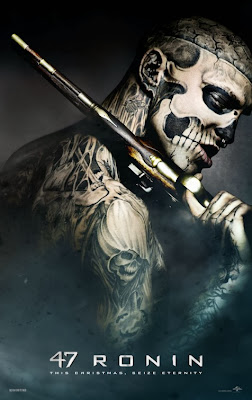 Reviewed by Matt 'Half Breed' Adcock

I am a Ronin, a master less Samurai who wanders the earth looking to restore my honour. Legends will be told of my valour, my courage and my 46 other pals who I like to kick ass with...

This special effects heavy, chop-em-up fantasy tale is set in Feudal Japan where Kai (Keanu 'The Matrix' Reeves) plays a half-breed warrior (half Japanese, half English) who was raised in the forest by demons after being abandoned there as an unwanted child.

We join his tale as he fights alongside a group of Samurai - in one memorable scene they take down a woodland dragon beast with six eyes - you know just for the LOLs. Anyway all is not good times and sushi because their master Lord Asano (Min Tanaka) is shamed and has to off himself leaving them disbanded as Ronin.

But the evil Lord Kira (Tadanobu Ansano - no relation to the good master character) wants them wiped out whilst he forces the young hottie princes Mika (Kô Shibasaki) - who is in love with Kai- to be his wife / thus joining the whole of Japan under his baddie rule.

Lord Kira is backed up not only by his army of Samurai but a huge metal clad warrior giant and a sexy evil witch played by Rinko 'Pacific Rim' Kikuchi - who has the ability to transform herself into various guises including a white fox and travel on the wind as a twisting silk kimono. Oh and when threatened the witch can also become a huge battle dragon-like creature!?

This won't be everyone's cup of tea but if you enjoyed The House of Flying Daggers or Crouching Tiger Hidden Dragon then you should give 47 Ronin a look as it delivers plenty of Samurai battles, some great fantasy creatures and has an ending you'll likely discuss for some time!

It really is a shame that 47 Ronin has flopped so hard at the international box office (only making back a fraction of its $175million budget) - I guess there are just not many Samurai fans left!?

Laughs ö – not a comedy