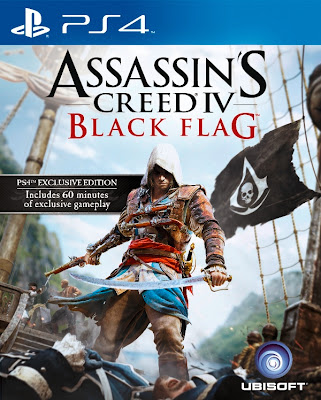 "We're Assassins and we follow a creed, aye.  But it does not command us to act or submit - only to be wise. Nothing is true. Everything is permitted. This is the world's only certainty!"

Calling all wannabe pirates and / or assassins - Ubisoft have created something rather wonderful which runs supremely on the sexy new PS4... If like me you were bit underwhelmed by Assassin's Creed 3 then let me reassure you straight away - Black Flag (as part IV is called) puts the franchise right back on track!!

Everything works really well - especially when you take to the open seas - visually you'll be blown away by the 1080 HD graphics which are notably better than the PS3 (or either Xbox for that matter) - you can almost taste the salt water as you battle the elements, plunder treasure and dispatch many many people to their death! 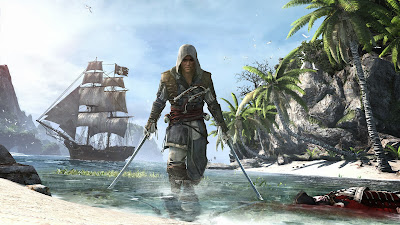 "enjoy your Caribbean travel - but bring a sword!"

The gameplay too is top-notch, packed with lovely little touches such as sea shanties you can collect which you then find your crew of pirates singing along to!? Ship to ship battles are immense - both satisfying and exciting as you attack, sink or board and capture various vessels in order to grab materials to upgrade your ship... or just for the LOLs...

The RPG-lite parts work well too and upgrading your trusty ship  'Jackdaw' is very rewarding. It pays off getting better weapons - so you can take down bigger, badder enemies, but everything just feels good about buying some new cool sails for your ship so you can swag across the oceans spreading fear before you!?

Your virtual pirate's life will also see you finding treasure maps and digging up chests on sandy islands, plus collecting the riches from guarded buildings (ok robbing), picking pockets, and even selling on your sea plundered goods will see you amassing money so you can invest in a hideout as well as upgrading your ship, personal weapons and a host of other items.

As you expand your pirate operation you can start a mini-business commanding your own fleet of ships to carry out missions for you - and this can be done on the go via the Assassin's Creed IV phone app when you're away from the PS4. Plus of course AC IV works really well via remote play on a PS VITA so you can take the fun on the road with you. 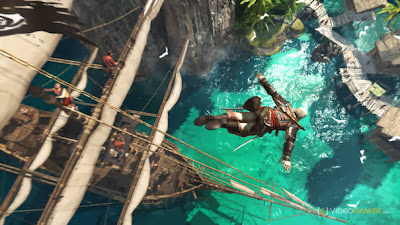 "leaps of faith - more appetising into a lovely warm sea"

Other highlights include a non PC whaling mini-game, underwater exploration, island based forts to attack and capture plus trying to avoid tornadoes and rogue waves on the open sea. If you're tough enough you can even take on 'legendary' ships before you get to the end...

You play the part of Edward Kenway, a lovable rogue who  kind of stumbles into the Assassin's Creed mythos. But there are a host of great characters in this adventure that include the feared pirate lord Blackbeard (who also makes an appearance in the cool multiplayer options too).

So why buy the PS4 version? Well as I mentioned it's by far the best looking one on the market with fully 1080 HD visuals, then there's also 60 minutes of PlayStation exclusive material which adds to the lore and world of Assassin's Creed (yes this is on PS3 too but you don't get the lovely lovely visuals or the cool additional functionality of the DualShock 4 touchpad etc), and finally there is a special feeling when playing AC IV via remote play on your PS VITA which is simply superb... 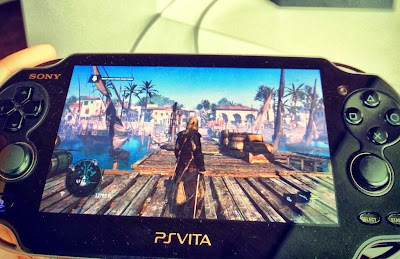