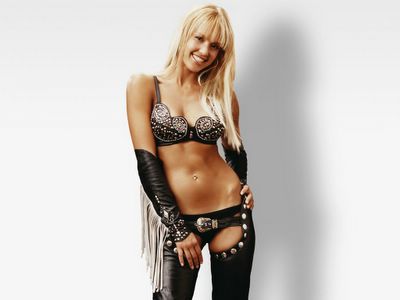 "This Sin City outfit is a keeper!!"
Matt Adcock meets Jessica Alba … and rest of the Fantastic Four!!

Jessica Alba, her very name is enough to make many men go weak at the knees…After scorching the screen with her ‘exotic’ dancing in Sin City and garnering a cult following as the sexiest soldier on the planet in the TV series Dark Angel – now she’s back in cinemas, filling the tight bodysuit of Sue Storm – also known as the Invisible Woman. I got meet her in London along with the other ‘fantastic’ team mates (Michael Chiklis – the brick ‘Hulk like’ Thing, Chris Evans – not the British ‘ginger winger’ but the actor who brings the Human Torch to life, and Ioan Gruffudd or ‘Mr Fantastic’ as you can call him).


So Jessica were you a Fantastic Four comic book fan?

Jessica: I actually wasn't very familiar with the Fantastic Four. I wasn't a big comic book reader as a kid. So my homework when I got the movie was to read the Ultimate and Marvel Night Series.

And to all of you, if you had a super-power for the weekend? What would it be?

Jessica: Everyone asks me what I’d do if I was invisible and one guy told me today that he’d like to be invisible in a girl’s locker room – to which I said touché, I’d like to be invisible in a guy’s locker room… But the funnest of all of the powers, and the most selfish, is the ability to fly. I think that's one thing we could all really enjoy for a good long weekend. I'd fly in the night, of course, so I wouldn't have to deal with the press.

Evans: I've always wanted to fly, it would be a beautiful way to see the world. I'd travel, see the Grand Canyon, Niagara Falls, Mount Everest - what wouldn't seem beautiful from 500 feet in the air?

Chiklis: Flying sounds really good. But I've always fancied great strength. That's why I was sort of cast in the right role. But for the weekend, I think I have to go with flight too. If you only had a limited amount of time, it's the thing you could do the most with.

Gruffudd: I wouldn't mind the ability to stretch. I think all us guys could do with a bit of help now and again, especially after ten pints of lager!

Erm – I’m sure I don’t know what you mean… Can I just say that I enjoyed the movie but some critics, especially the US ones have knocked it – what’s your reaction to that?

Jessica: Anyone who was negative critically obviously didn't read the comic book and didn't know what the Fantastic Four was about for its time. They're also trying to pick Academy Award winning movies, not movies that audiences want to go to and have fun, and laugh for 90 minutes, and escape their everyday realities.

Chiklis: It seemed like they were reviewing Wuthering Heights. Look, we went in to it knowing what it was and what we were trying to make, which was a fun ride - something to go to with the family, friends, or a date, or with children, and have a ride and a laugh. It's fun!

Jessica – you look great in this film and have developed a very ‘sexy’ image – especially in Sin City - are you ever worried that people will just see you as a sexy female lead rather than a good actor?

Jessica: I just think the more variety that people see in the different roles that I play the better. In this movie, Sue Storm is sexy. I put on a tight outfit, I am the only woman, so of course that's what people's minds are going to go to. But at the end of the day, that's alright.

Ioan, was it disappointing to only get to kiss the ‘Invisible’ bits of the Invisible Woman?

Gruffudd: Well Jessica kindly allowed me to feel what it was actually like, before I started kissing the air, miming it.
Jessica: Well that was because you were groping me low.
Gruffudd: Hey, you'd given me the green light, you know. Those moments in the film, we'd do it once, naturally, and then Jessica would step away and then I would physically resort to mime.

He goes on to demonstrate his mime kissing skills which I have to admit are fairly impressive…
How did you mange to look the part in the spandex?

Gruffudd: Six months down the gym! To be honest, you need a little bit of help from the sculptor who sculpted our muscle-suits that we wore underneath. Myself and Chris that is, Jessica is perfectly natural.
And I heard there are two projected sequels?
Chiklis: Doing this movie was sort of an hour by hour process for me, so it's hard for me to go back and transform into the Thing. But I think we all look forward to doing more.
Earlier Jessica Alba Post / Photos
Reviews of other films and stuff you might want to read indexed here 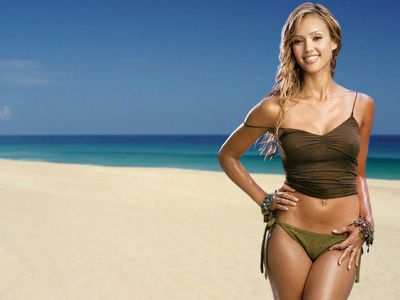 "The invisible woman - not so invisible after all... thank you God!!"
Posted by Matt Adcock at 3:49 pm

if ever we needed a reason not to like you this would be it ;-(

she's mine goddam it.

Hi
I was looking around blogland for some info to add to my sitehttp://tummy-tucks.wise-owl-ebooks.com when I came accross your blog, very nice effort. I know what I like and I like it.

She got a sweet smile.. She's incredibly sexy. To know more about her, read Jessica Alba bio.