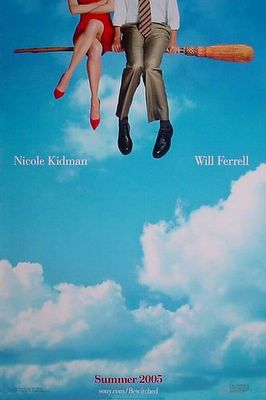 
You what’s great about this big screen romantic comedy remake of the much loved 60’s TV series Bewitched? No? No, I couldn’t spot it either! You can however almost hear the devious film company suits thinking out loud “let’s make a quick buck out of the suckers who used to watch this on TV!”
It’s not very funny, it’s not got any chemistry between the romantic leads (Nicole Kidman is cute, Will Ferrell isn’t) and by the end of the film I guarantee that you’ll walk out of the cinema feeling like you’re under a spell that makes you a bit gutted at having wasted a couple of hours of your life…
But before you completely dismiss an evening in the company of super goof Ferrell and the kooky nose twitching Miss Kidman I must point out that there are a few funny moments on offer. Most of them relate to the fact that just like in the TV show, Kidman’s character is a real life witch who is trying to ‘go straight’ by giving up her magic. The kind of witchcraft on offer here however is all of the ‘snap your fingers and make a brand new VW Beetle appear’ or ‘wind the clock back 5 minutes so you can still order breakfast at a diner’ type. There’s no child sacrifice or naked dancing in graveyards and even the flying on broomsticks is kept to an absolute minimum.
Some merit must also be awarded to this version of Bewitched because it shows the TV show being remade within this remake, which is at least a fairly sweet idea. And even though director Nora Ephron fumbles the star power at her disposal (apart from Michael Caine who steals all his scenes as Nicole’s warlock dad) – you’ll probably crack a smile at some of the lines such as Ferrell reading the test audience reaction feedback on his role: “Darrin is a complete tool, he’s really useless and I don’t mean the character I mean the actor!”
Alas the overriding impression is that everyone concerned might be just trying a bit too hard, apart from the always watchable Kidman, who merrily strides through the film and looks like she’s enjoying it. And she is so darn cute – maybe I’m still slightly under her spell but overall Bewitched just didn’t ‘do it’ for me - and no amount of hexing, magical invocations or nose wiggling are going to change my mind.

Darkmatt Rating: öö (One star for the film, one for Nicole... she's worth it!) 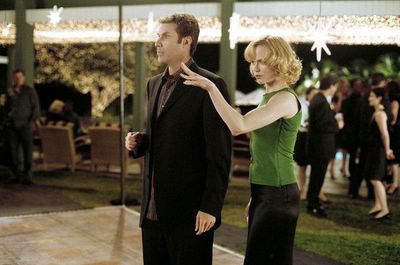 "Mr Ferrell, I'm going to magically make you go over there and beat the crap out of my ex-husband..."

I figured that it would be a film to avoid, even with Nicole Kidman in it, sounds like something I would rent from a video stor if I was really bored.