Film Review: The Dukes of Hazzard 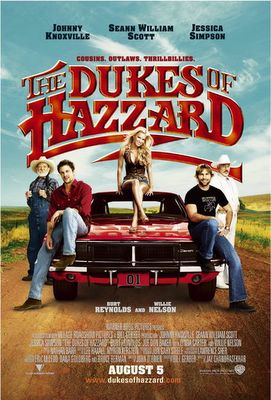 The Dukes of Hazzard (12a)
Dir. Jay Chandrasekhar

Looking back now it seems that Saturday evenings in the 80’s were a prime time for iconic vehicles – remember that computer aided black car that drove itself, or the black van full of ex military types who righted wrongs? Top of my list though has to be a certain orange 1969 Dodge Charger with the U.S. Confederate flag painted on its roof… Ah yes, running moonshine in the General Lee, getting into mad bar brawls and wearing a teeny tiny pair of denim hot pants, those were crazy days but I’ve mellowed quite a bit since then. And what about that theme song: “Just'a good ol' boys, Never meanin' no harm. Beats all you never saw, Been in trouble with the law, Since the day they was born…”? They don’t make em like that anymore – oh wait, apparently they do actually. It seems that those thrillbillie cousins ‘closer than brothers’ also known as The Dukes of Hazzard are back but the question is - can their outdated good ol’ boy rhetoric cut it on the big screen some 20 years later?
That I’d wager depends on how you feel about three things: multiple car chases, sassy babes in bikinis or hot pants and high brow, intellectual plots that you need to have a PHD in psychology in order to fully understand the subtleties of... Yes Dukes director Jay ‘Broken Lizard’ Chandrasekhar manages to nail the feel of the original TV series in all its dimwitted backwoods glory. So if you didn’t like it then, you probably won’t like it now but for me Seann William Scott and Johnny Knoxville were fun ‘shoe ins’ as Bo and Luke Duke and country music legend Willie Nelson made an inspired Uncle Jesse. Then there’s Jessica Simpson as Daisy Duke who proves that not being able to act doesn’t stop you being very very watchable when you’re blessed with her ‘dynamic’ physical attributes.
Burt Reynolds also shows up in the baddie role as Boss Hogg and even though he doesn’t have much to do, it’s fun to see him revisiting territory he once owned in films like Smokey and the Bandit.

Readers from LUTON only:
And with a reverberating “Yee Haaa”, like the Duke’s it’s my turn to ride off into the sunset. After four and half years, 243 reviews, or approximately 97,200 words of Herald & Post copy I leave with a fond farewell to all you lovely readers - this is your friendly neighbourhood film reviewer signing off… Let’s be careful out there.

So rev your engine, set your expectations to ‘dim’ and buckle up for some retro no brain fun. Like its heroes The Dukes of Hazzard is not big or clever and you already know pretty much everything that will happen but there’s just about enough on offer here to please your inner hill billie. Yee Haaa… 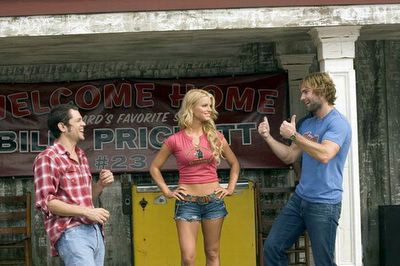