Darkmatters Review: And Soon The Darkness 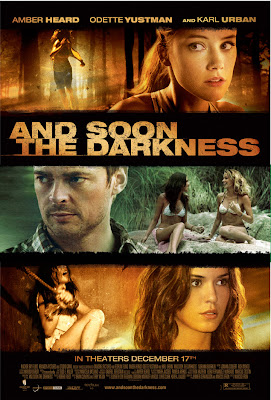 Did you hear the tale about the two young, hot, American girls (Amber Heard and Odette Yustman) who go cycling in Argentina?

You know, the one where one of them gets kidnapped, tortured and whose life depends on her lovely blonde friend tracking down the kidnappers and saving the day?

Well – if you this ‘tale’ does sound familiar, chances are that you might have seen the original 1970 British thriller of the same name (which was set in France).

So what’s good about this slick remake? First and foremost is the casting of the two female leads - Heard and Yustman are both smokin’ hot babes – both can act and each of them are carving out decent film careers. I’ve been a huge fan of Amber Heard ever since her amazing performance in All the Boys Love Mandy Lane Heard – and she has sizzled up the screen in pretty much everything she’s been in from then on.

"an important scene for the plot of the film!?"
Even the poor remake of The Stepfather was rendered watchable thanks to miss Heard slinking around in a bikini, which must have been noticed by writer-director Marcos Efron here because he throws in a key voyeuristic sun bathing scene with the express purpose of showing off the two stars. Amber’s no dumb blonde either as she co-produced the film.

From the nice touristy opening, the film then ramps up the suspense, And Soon the Darkness follows the tried and tested formula of cute foreigners in danger thrillers. Karl ‘soon to be the new Judge Dredd’ Urban is the requisite hunky hero who helps save the day. Things look grim for a while and there are some plot twists thrown in for good measure. It all looks good (the scenery as well as the cast) and is competently made, so whilst not ever likely to be regarded as a classic – this is a thriller worth checking out. 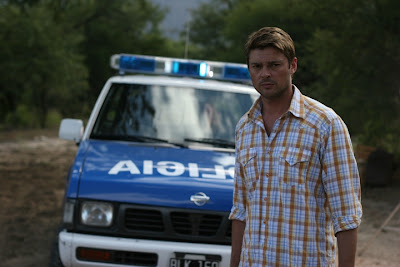 "Hero ready"
Walking a fine balance where nothing gets too nasty, the threat and torture are handled with admirable restraint. And Soon the Darkness won’t satisfy gore hungry SAW fans but it shows that there is skill of making an ‘almost horror’ film that doesn’t completely suck.

Bikini scenes are always necessary. I had no idea Urban was going to be the new Judge Dredd, I'll always think of him as Bones, the fearless rider of Rohan who killed Jason Bournes girlfriend.