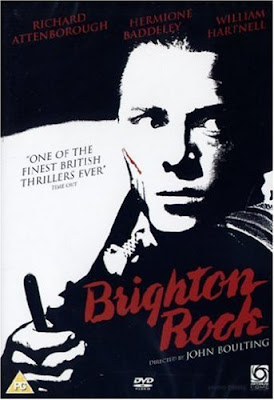 
one hour's journey from London.


But in the years between the two wars, behind the Regency terraces and


crowded beaches, there was another Brighton of dark alleyways and festering


slums. From here the poison of crime and violence and gang warfare began to


spread until the challenge was taken up by the Police.


This is a story of that other Brighton - now happily no more.”

With the remake hitting cinemas this year – there’s never been a better time to brush up on the excellent original, now digitally restored and available for the first time on Blu-ray.

Featuring a star making turn from young Richard Attenborough as the weasel faced Pinkie, leader of a seedy gang of crooks. Yes Brighton Rock, or ‘young scarface’ as they called in initially in the US is the crime tale adapted from Graham Greene's classic novel.

The new restored picture quality is by far the best way to witness this sneaky peek into the underworld of bustling Brighton. Amidst the tourists and tawdry London types taking the sea air there is a crackling undercurrent of bother that grips throughout.

There are many memorable scenes including the thrilling early chase sequence in which newspaperman Kolley Kibber is hounded by a gang of razor-blade packing henchmen through the daylight streets. The juxtaposition of knife violence and candy floss – mixed up with a heady dose of religious guilt and repressed sexuality – all makes for a fantastic cinematic experience.

Brighton Rock belongs to Attenborough though – his iconic lead performance is absolutely mesmerising to watch.
It’s a bleak and unrelentingly grim storyline brought to vivid life by the superb cast who have created a classic dark noir thriller. Perfectly summed up by Ida (Hermione Baddeley) when she says:
“I've never changed. It's like those sticks of rock. Bite one all the way down, you'll still read Brighton. That's human nature.” 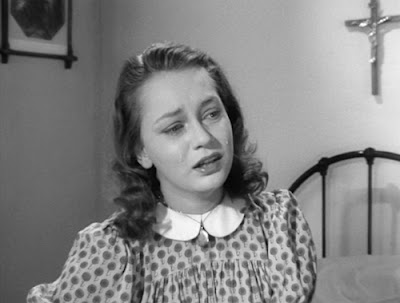 "Catholicism issues?"
Posted by Matt Adcock at 12:07 am