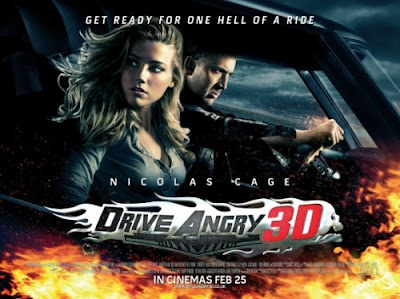 “Tell them, I’m coming… Hell is already walking the Earth”

How far would you go to avenge the death of your daughter and save the life of her baby? If you’re John Milton (Nic Cage in full on wild eyed, insane mode) then you’d break out of hell itself and hunt down the sick murdering cult leader who killed your loved one and plans to sacrifice her baby to Satan. Seems only right really. 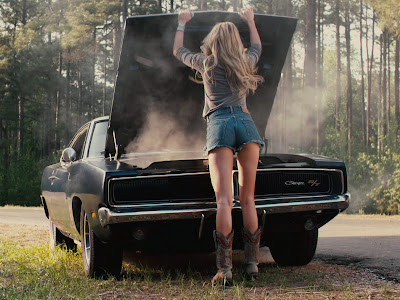 "Amber Heard - looks very good in 3D"
Drive Angry 3D is a lurid, pulpy nitrous powered assault on your frontal lobes. I don't think anything can quite prepare you for this balls out, full throttle overload of wanton 3D action, sex and violence. So if you’re easily offended – be it by nudity, gore, cussing, violence or dodgy acting, then you really shouldn’t check this film. If however you like your plot and dialogue off the scale stupid, your women smoking hot and your action totally over the top, then Drive Angry might just be the best film you’ve ever seen. 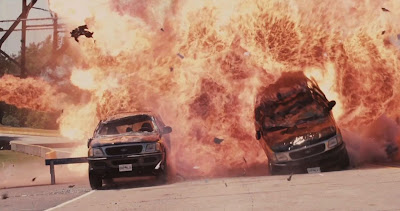 "This is 'driving really angry'"
The revenge / save the baby plot won’t win any originality awards but it serves as an excuse for director Patrick ’My Bloody Valentine’ Lussier to wreak as much bloody carnage as humanly possible – all in eye-popping 3D. Lussier delivers a megaton action horror that has put him on the cinematic map, and bagged him the right to make the next Halloween and Hell Raiser films. He is also an unlikely master of 3D – cars, bullets, blood and babes are surely what 3D was developed to deliver and Drive Angry 3D has the best 3D around.

Amber ‘All the boys love Mandy Lane’ Heard is the hot ticket actress of the moment and she delivers a great love interest / side kick to Cage here. The supporting cast are strong too with the excellent William Fichtner channelling Christopher Walken as Hell’s own unstoppable ‘Accountant’ and Billy Burke is all twitchy satanic menace as deranged cult leader Jonah King. 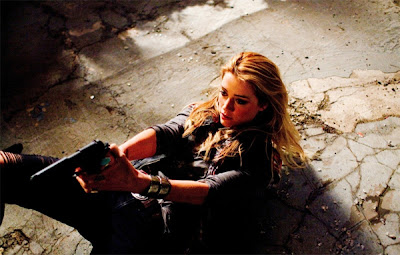 "Not just a pretty face"
Drive Angry 3D is a cult classic in the making, packing mean classic US automobiles such as the ’69 Dodge Charger along with unforgettable scenes including a ‘Shoot ’Em Up’ homage where Cage gets into a massive close quarters gun battle whilst making love to waitress.

It might not be big or clever, but Drive Angry 3D is perfect pulp fiction schlock and action fans should sell their souls to see this!

Awesomeness ööööö – don't fear the reaper
Laughs ööö – slap stick violence a go go
Horror öööö – goes over the line of good taste many times
Babes ööööö – Amber Heard is a thermo-nuclear hottie
Spiritual Enlightenment ööö – did you know that Satan doesn't like when people sacrifice babies to him?
- - -

"Amber is the hot ticket actress for 2011"
More Amber Heard reviews on Darkmatters:

Miss Heard stars in And Soon The Darkness
Best looking zombie in Zombieland
Comedy star in Pinapple Express
and
Trophy girlriend in Never Back Down
Posted by Matt Adcock at 12:19 pm

Wow I can't wait to see this.
Got tickets booked for Friday and you have just whet my appetite.
SO VERY EXCITED

So you're saying that the material is taken seriously...and it's still good? I was NOT expecting that outcome. More like, tries to be serious but ends up unintentionally funny, a la The Wicker Man. Still, kinda nice to hear. YBLM