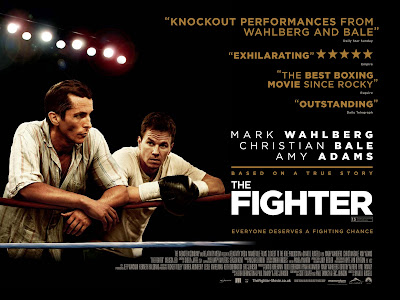 As the awesome Clubber Lang (Mr T) said in Rocky III “My prediction for the fight? Pain!”

Unlike Rocky III however The Fighter isn’t a showboating fight movie – this is a gutsy recreation of the true life gutter to contender story of Micky Ward whose stop start welterweight boxing career included some of the most memorable fights ever witnessed.

Mark Wahlberg steps into the respected fighters shoes / gloves and turns his usual slightly confused expression to good use as "Irish" Micky Ward – a boxer living in the fading shadow of his older brother Dicky (Christian Bale). Dicky is a crack head former big shot whose claim to fame is that he once floored Sugar Ray Leonard, although some say that Leonard just slipped. Whatever the truth Dicky has been riding on that one fight his whole life – wearing the title ‘pride of Lowell’ - the small town he and his brother hail from.

Bale is a hot tip for Oscar success for his supporting actor role and it’s easy to see why. He looks absolutely nothing like his Batman character – more like the painfully thin lead from a film he did some time ago called ‘The Machinist’. Bales’ Dicky is a twitchy, bug eyed, fidgety freak show – highly volatile and living his life by screwing-up beyond the call of duty. Melissa Leo is also on screen chewing form here as the boys batty mother / manager – an overbearing nightmare who favours her older son and secretly wants to see him regain some of his lost glory. Micky however she is happy to pimp out to fight organizers who just need a punch bag opponent for their upcoming fighters. 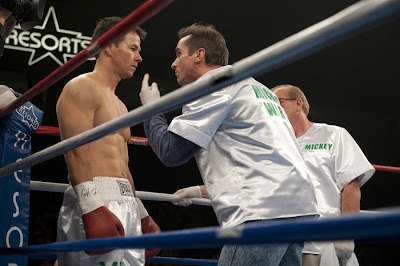 There is plenty of dark humour to go with the brutal ring action like when a film crew who is following Dicky for an HBO documentary turns out not to be covering his big comeback but actually making a fly on the wall film about the horror of crack addiction.

The fighter is a great film, it has something for everyone – enough fight action to keep the Rocky / Raging Bull crowd happy but also sufficient out of the ring drama to stand as a fantastic piece of cinema. Recommended viewing.

I've been thinking about seeing this. Bale is always a bit unnerving when he loses all that weight, at least he won't be able to welt the lighting guys as hard in that state.

I'm not sure I've forgiven Wahlberg for Max Payne...

I agree. Bale is like the opposite from Batman in here. YBLM