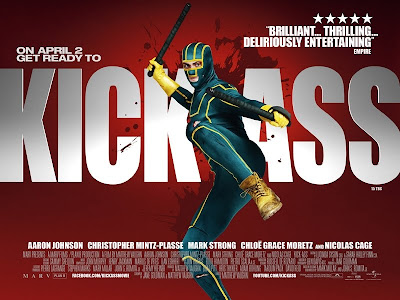 "this is potentially the best movie of 2010"

“With no power, comes no responsibility…”.

Prepare for something different, something that kicks the ass of action films and exceeds the expectations of even the biggest comic book geek’s super powered wet dreams.

Kick-Ass is a fantastic new breed of superhero movie, a twisted, action packed megaton of wanton comic violence quite unlike anything you’ve seen. Created by Mark Millar, author of the excellent ‘Wanted’ and directed by arguably the hottest British director of the moment Matthew ‘Layer Cake and Stardust’ Vaughn – Kick-Ass sets the new benchmark for awesomeness.

This is the story of young Dave Lizewski (Aaron Johnson), he’s your average high school kid whose only super power is being invisible to girls, especially the class hottie Katie Deauxma (a suitably sexy Lyndsy Fonseca).

But thanks to his love of comic books, Dave harbours a secret desire to be a superhero. So despite not having any powers, skills or training, one day he buys himself a wetsuit online and sets out to fight crime as ‘Kick-Ass’. Alas Dave isn’t very tough and his first encounter with some thugs sees him getting beaten to within an inch of his life, stabbed and hospitalised for 6 months!?

Amongst these wannabe heroes emerge two serious caped vigilantes – the Batman like ‘Big Daddy’ (a pleasingly “not crap” Nicolas Cage) and unquestionably the star of the whole movie ‘Hit Girl’ (Chloe Moretz). Hit Girl is an unbelievable character, foul mouthed, brutally violent, cuttingly funny, cute as you could ask and erm, only eleven years old… A cinematic icon has been born and she’ll rock your world.

Moretz is going to be a huge star, she brings a pitch perfect performance to the role that will antagonise Daily Mail readers and delight comic book fans in equal measure. Cage too deserves praise for out Batman-ing The Dark Knight by playing Big Daddy with the cool camp vocal stylings of Adam West.

Kick-Ass is basically a perfect storm of adrenaline pumping action, heart rending emotion and sneeringly dark comedy. Hats, tights and capes off to Vaughn for bringing such a wild and wonderful tale to the big screen without compromise. Any film that fuses comic and film references as good as to have ‘The Spirit 3’ playing in the cinema is going to become the new favourite of many a generation of superhero fans.

I have seen the future of comic book movies (and potentially the best film of 2010)… and it is Kick-Ass. I’ll leave you with my favourite quote from the ass kicking Hit Girl who responds to Dave when he asks:

“Just contact the mayor, he has a special signal that shines in the sky… it's in the shape of a giant cock!”

Kick-Ass and Hit Girl stumble through a dimensional hole and find themselves face to face with various 'real' superheroes such as Spiderman, the X-Men, Superman etc - and they join up to form a super superhero team beyond any yet imagined. 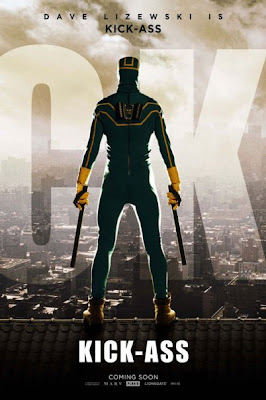 "with no power, comes no responsibility..."
Buy the graphic novel

"gangland bosses brutally slaughtered by a foul mouthed 11 year old... the Daily Mail are not happy..."

Read up on the film 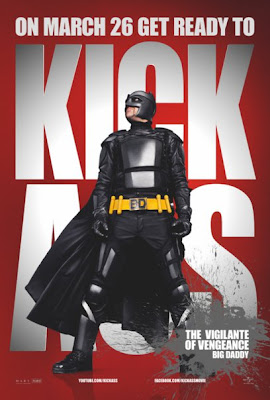 Get ready to KICK ASS! 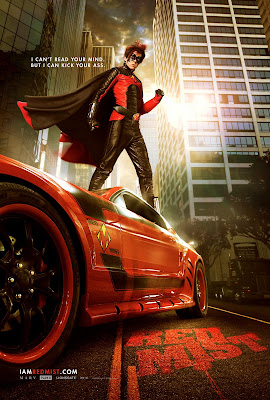