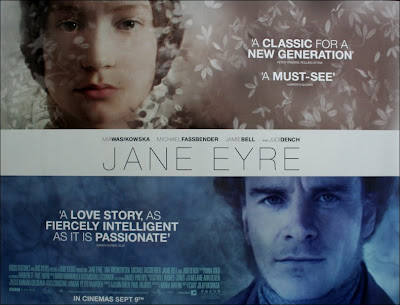 “A wanderer's repose or a sinner's reformation should never depend on a fellow-creature. Men and women die; philosophers falter in their wisdom, and Christians in goodness: if any one you know has suffered and erred, let him look higher than his equals for strength to amend, and solace to heal.”

It seems that Hollywood just can’t stop remaking classics – with variable success – but this new rendition of Charlotte Brontë’s gothic tale of love and heartbreak is a cut above any of the 20+ versions that have gone before.

For those not blessed enough to have read the book, Jane Eyre is the story of 19-year-old Jane (Mia ‘Alice in Wonderland’ Wasikowska). Her ‘tale of woe’ is that of having been brought up an unloved orphan (young Jane is played by the excellent Amelia Clarkson) in a seriously severe boarding school where no child is spared the rod and not all survive. Upon release Jane finds what she thinks is happiness working as a Governess for a handsome and imposing aristocrat Edward Rochester (Michael ‘Fish Tank’ Fassbender), but he hides a terrible secret that could wreck both their lives. 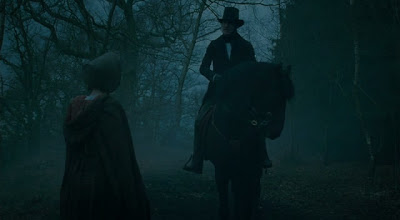 "beware the woods at night..."

Is there any way in which the poor Miss Eyre can find love and acceptance in the arms of her employer or are they doomed to unrequited affection? The course of true love certainly doesn’t run smooth and along the way Jane must grapple with the unwanted amorous attentions of sappy young clergyman St John (Jamie Bell) who means to take her to India as his missionary bride. There are also mysterious noises in the night, sinister tales of a woman who walks the house after dark who passes through walls and many a windswept moor to be negotiated.

The cinematography of director Cary ‘Sin Nombre’ is excellent throughout – the film builds up delicious undercurrents of menace and makes effective use of the staples of the gothic novel: dark storms, large daunting houses, suspected peril and deep, smouldering looks passed between characters. In a cinema year that has been low on high-brow quality romances Jane Eyre is a welcome visual and emotional cinematic ravishing of the soul.

For those seeking altogether superior film viewing (and/ or a cracking thinking person’s date flick) then this should be witnessed on the big screen if at all possible.

Horror öö – some jumps and menace

Spiritual Enlightenment ööö - true love can cost you everything

"Wasikowska - not such a plain Jane perhaps"