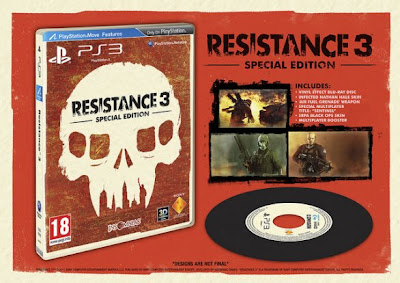 
Ah August, 1957… I still remember that fateful time…. It was yesterday…

America was lost to the Chimeran scum, we humans had been toasted on the battlefield, enslaved and even converted into freakish monsters – monsters who existed to hunt and kill the last humans left alive.

Sentinel Joseph Capelli had given up fighting the alien fiends after his dishonorable discharge from the army but now when his wife and son are threatened he must draw together the remnants of humanity left in the aftermath of the brutal Chimeran invasion. And try to form a new Resistance…

Insomniac Games’ are pretty darn tasty when it comes to working on the PS3 – Resistance 3 is their fifth-generation engine and it really shows. The graphics sparkle, the controls are immediately second nature and the levels to fight through are living, breathing masterpieces of cunning design. Resistance 3 is so full of win that it beats the living daylights out of the first two games. Everything has been refined, improved and machine tooled to give you a hair-raising, spine tingling blast-em-up par excellence!?

You get to ‘be’ Capelli as he fights for survival, packing new (and returning but now upgradeable) weapons, each is a joy to wield from the meaty human staples of magnums, shotguns, machine guns, rifles and snipers through to the energy bolt firing, see and shoot through walls alien weaponry. And if you think it’s fun using the lovely spread of weaponry in single player campaign (which can be co-oped) – just wait till you go up against your mates in multiplayer deathmatch with them!!

So yes, Resistance 3 is undoubtedly the best in the series to date, and it redeems the slightly less fun Resistance 2 which failed to cement the games as classics – if you only ever play one Resistance game, 3 is the magic number! I’m not kidding when I say that Resistance 3 is up there with Killzone 3 and Gears of War 3… This is a good year for ‘3’ games with Uncharted 3 and Mass Effect 3 still to come!

It’s not like there is a shortage of first-person shooters out there either (and with Battlefield 3 and Modern Warfare 3 arriving soon – more quality ‘3’ games) it looks like this is a golden era for making virtual warfare. 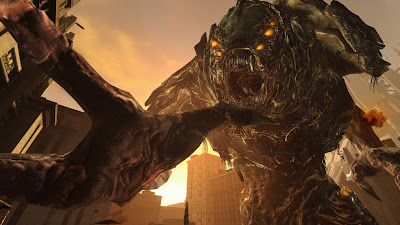 "Wow - what big teeth you have..."
I was lucky enough to face the Chrimera in person at the ‘And Darkness Descends’ live action prequel event in London – which was a great way to set up the plot of Resistance 3. But even if you’ve never played a Resistance game before and didn’t get to the ‘darkness’ event – R3 is so welcoming that you’ll feel like you’ve jumped straight into a brand franchise – and it will be one of your very favourites!!

And for those who like their shoot-em-up in 3D, Resistance 3 is an absolute beast in that it really gives Killzone 3 a run for it’s money in terms of how slick and immersive it feels. Yes it also packs the option to use the nifty PS3 Move Gun attachment too – so for those who like to pull a real trigger rather than a controller button – step right up!


Resistance 3 is an awesome game, anyone who likes to shoot stuff (especially sci-fi fans) will find hours of pleasure here. Don’t deny yourself a slice of superb fun – everything about Resistance 3 is pure class, the PS3 is kicking all sort of ass this year!! 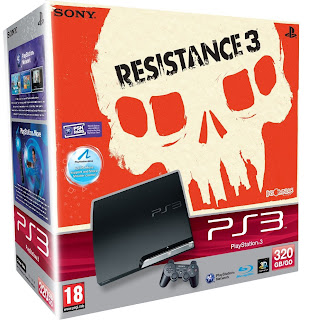 Check out the official site
Posted by Matt Adcock at 11:10 pm