Darkmatters Review: Aliens in the Attic 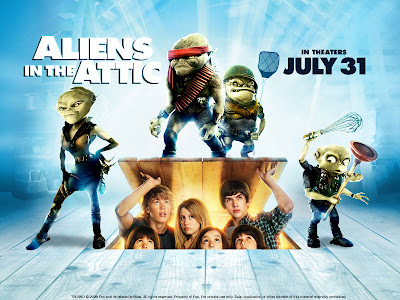 Aliens in the Attic (PG)

Dir. John Schultz - who previously brought you When Zachary Beaver Came to Town and Like Mike

Reviewed by Matt Adcock (watched with sons - they loved it)

Ever fancied being able to remote control another person? What about a member of your family? That's just one of the innovative ideas Aliens in the Attic brings to the big screen and it leads to the best one on one fight this year... Yes thanks to alien full body control devices that allow a person to be controlled with a PlayStation like joypad, we get a battle royale between Ritchie (annoying boyfriend character controlled by the baddie aliens) and earth's last best hope - granny or ‘Nana Rose Pearson’ controlled by the kids. I guarantee that the sight of a grandma doing flying kicks and ninja fight moves that wouldn't look out of place in a kickboxing movie or game like Tekken on the PS3 will stay with you forever. Alas that’s pretty much the only reason to check out this movie unless you’re following the career of High School Musical's Asley Tinsdale who reprises her bratty teen persona as Sharpay, sorry, Bethany and does an ok job looking cute and vacuous (which must have been a stretch!?). 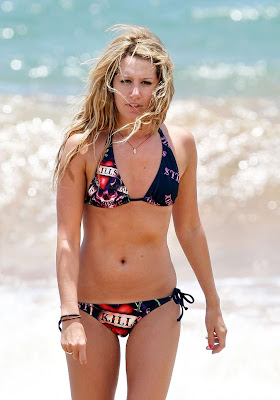 "did someone say cute and vacuous?"

Overall the movie is average family friendly fun, better than this summer's G-Force but not as good as Transformers 2. The action cracks along at a pleasing pace and at a brief 86mins these little aliens don't outstay their welcome. My two sons enjoyed it more than I did so it looks like the target pre-teen audience will give this the thumbs up, adults accompanying them can just play the fun game of spotting the massive amounts of product placement…

So the fate of the earth rests on the scrawny shoulders of these kids who are a likeable enough average bunch of siblings. Austin Robert Butler is probably the best of them and looks to have some star potential and could be ready to step up as the next Owen Wilson with charisma to spare. 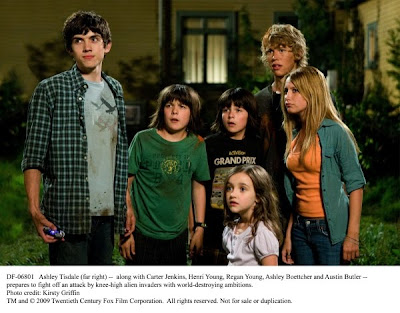 Aliens in the Attic is a perfectly disposable bite sized bit of nonsense, Director John ‘Like Mike’ Schultz proves again that he can churn out watchable kids b-movies in his sleep. If you’ve children or sci-fi nerds who need entertaining then this will do the job, others need not worry as there’s bigger, potentially much better alien fun on the horizon as James Cameron brings Avatar - the most expensive film ever - to the screen later this year.


Darkmatters final rating of: öööööö (6 better than it should have been)

Action 6 (would have been 4 but for the excellent nanny fight!)

Style 6 (the aliens aren't as cool as Gremlins)

Comedy 7 (some fun with body control!)

Spiritual Enlightenment 4 (free will - is it a myth?)
Posted by Matt Adcock at 11:14 pm

Email ThisBlogThis!Share to TwitterShare to FacebookShare to Pinterest
Labels: aliens in the attic, aliensatemyhamster, Asley Tinsdale

DarkMatt or whoever runs this site, I'd like to full body control ASley TInsdale. THat would be a fun trip!