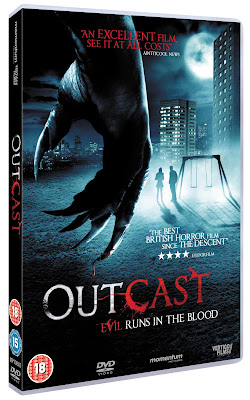 Outcast is the debut feature from director Colm McCarthy (who cut his teeth on things like Spooks, The Tudors, and Murphy’s Law). It tells a tale of contemporary supernatural horror film steeped in ancient Celtic occult, mythology and mysticism. Get ready for weirdy beardy dark forces mixing with the everyday horror of your average rundown Edinburgh estate.

It’s an distinctly odd mixture but Brit horror films have a reputation for boundary shifting and new genre defining – see Heartless last year as a good example. With Outcast we get the bonus of a great erm ‘cast’ which includes James ‘Cold Feet’ Nesbitt, Karen ‘the assistant babe from Dr Who’ Gillan, James Cosmo, Kate Dickie and Christine Tremarco, Niall Bruton and Hanna Stanbridge.

Inner city sink estate horrors can be effective as the working-class vibe is a nice gritty alternative to the spoilt rich kids stereotype that so many horror films deliver. Central to the plot is Fergal (Bruton) and his mum Mary, for reasons initially unclear they are being hunted by a mystic hunter called Cathal (Nesbitt) who wields occult powers and means to kill the boy. Shapely love interest distraction for Fergal arrives in the form of a Scottish-Romany girl Petronella (Hanna ‘going to be a big star’ Stanbridge). Petronella hangs out with smokin’ hot pre Dr Who pal Ally (Karen Gillan) and frequently cross paths with the local NEDS. 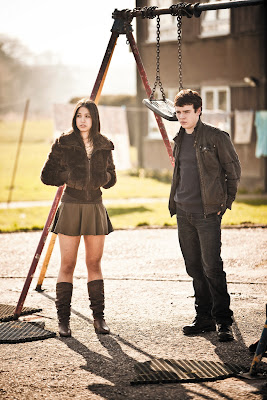 "beauty and the beast 2?"
But something very large and nasty is also hunting the populace – could one of the (out)cast be a slimy hairless werewolf sort of creature??

So the scene is set for supernatural chasing, arcane battling and magical protection / misdirection… There are some memorable scenes that stay with you such as when Mary curses an uptight housing official – wiping her mind so that she is doomed to wander the earth until the end of her days. Overall there is much to enjoy.

The climax doesn’t quite deliver as much as I had been hoping for – but the weird and wonderful journey to get there is one worth taking for all horror fans! It’s easy to see why Outcast was one of the standout features for horror fans at London’s Film4 FrightFest in 2010.

"Who needs the Dr when you look this good?"
Posted by Matt Adcock at 9:25 pm