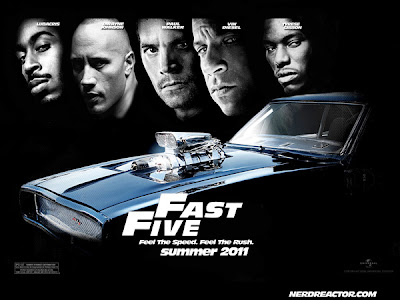 “Chances are sooner or later, we are gonna end up behind bars or buried in a ditch somewhere. But not today…”

…Today we go see some stupid, larger than life car crime based action!

Since the original The Fast and The Furious blasted big car race / chase undercover cop thrills onto the big screen ten years ago, it has become the go-to franchise for auto adrenalin.

Now as the title kind of suggests we’re riding for the fifth time with the speed-freak crew of former undercover cop Brian O'Conner (Paul Walker) and his main man partner - ex-con Dom Toretto (Vin Diesel). Although if you want to be pedantic about it these two main characters skipped part 3 but hey, they’re back again now after reuniting in 2009’s Fast and Furious.

In case you missed part 4, you should know that since O’Conner and his girlfriend / Toretto’s sister Mia (Jordana Brewster) broke Dom out of custody, they've blown across many borders to elude authorities. Now backed into a corner in Rio de Janeiro, they must pull one last $100 million job in order to finally gain their freedom.

"check the crew"
The pals get an expert team of racers and crime specialists together in order to try and pull off the massive heist. As usual the authorities are hot on their heels and led for sheer fun factor this time by the hard-nosed federal agent Luke Hobbs (The Rock / Dwayne Johnson) who you just know is going to get into a macho fist fight with Diesel at some point. But as well as the cops, the heroic car racing thieves are being hunted by corrupt crime kingpin Reyes (Joaquim de Almeida) who won’t stop until they are all dead.

Fast Five is an improbably exciting and altogether superior sequel which will delight fans of any of the original four films. The action scenes are slick and frankly superb, especially the climax heist which brings possibly the most insane on road action you’re ever likely to see. Also big F & F fans shouldn’t leave until you’ve seen the additional scene that follows the credits – which points to a possible 6th entry…

Director Justin Lin, who has form for these movies having made the last two, is getting better each time. Fast Five shamelessly injects extra crowd pleasing elements such as a kick ass Call of Duty style gunfight to complement the fast and erm, furious driving action.

Car loving ladies and gentlemen, get down to the cinema and start your engines!!

Out of a potential 5 you have to go with a Darkmatters:
öööö

Laughs öö – mildly funny (best not taken at all seriously)

Horror öö – some deaths but not much brutality 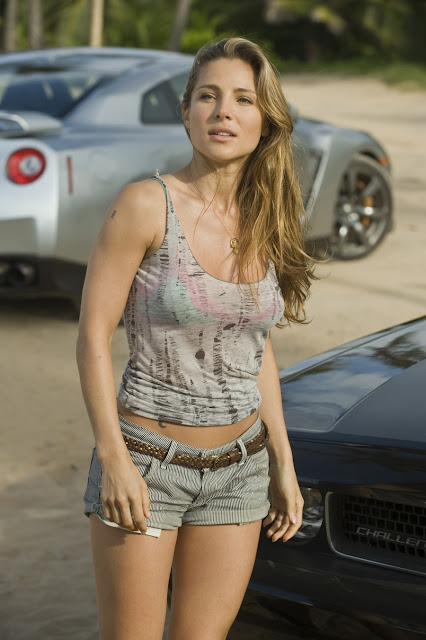