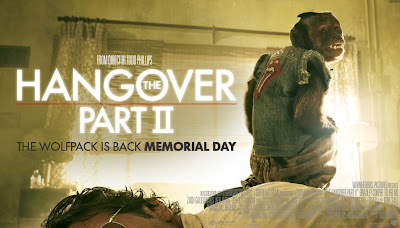 Two years ago, many men laughed until they cried as The Hangover set a terrifying new benchmark for stag night insanity. Sensitive souls yet to tie the knot (and their girlfriends) – looked on it horror at just what debauched antics men can get up to in the name of fun... Either way The Hangover’s Wolfpack of guys made big bucks and so as sure as night follows day, here comes Hangover II.

Plot wise, this is pretty much more of the same from the first installment, it’s not fresh and it is pretty predictable but that still doesn’t stop it being funny. And, as is par for a sequel, the set pieces are more messed up and played for higher shock value. So if you’re going to take this heady trip to Bangkok, get ready for even more crude and controversial drug, sex, nudity and eye-wateringly violent humour. 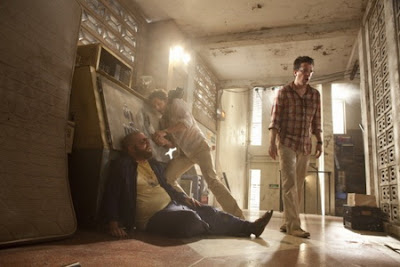 "what just happened?"
This time the Wolfpack – smooth Phil (Bradley Cooper), wimpy Stu (Ed Helms), sensible Doug (Justin Bartha) and crazy Alan (Zach Galifianakis) are geared up for Stu’s forthcoming Thai wedding. Even though he protests that he doesn’t want a bachelor's party, before you can say ‘who drugged the campfire marshmallows?’ the guys are waking up in the aftermath of a very very wrong night on the town.

"It's happened again!" is the disgruntled cry and thus the chase is on to try and work out exactly why Stu has woken up with a Mike Tyson tribal facial tattoo, they have a chain-smoking, willy nibbling monkey in a denim jacket in their hotel room and Stu’s soon to be brother in law - 16-year-old genius Teddy (Mason Lee), is AWOL is missing, apart from his detached finger.

Also back for seconds is Mr. Chow (Ken Jeong) — you might remember him as the naked Asian guy who leapt out and attacked the guys in part 1. He’s now pals with Alan and serves no real purpose apart from getting the gang into some more contrived dodgy scrapes. Paul Giamatti does a cameo complete with some good one liners but overall Director Todd Philips is on comedy autopilot and doesn’t push his material in the direction of ‘hilarious’ nearly often enough.

The Hangover part 2 is no classic but if you’re after a no brain dose of crude fun, there are just about enough funny moments to make this worth a look.

Horror öö – Not too much unless you freak seeing men's tackle