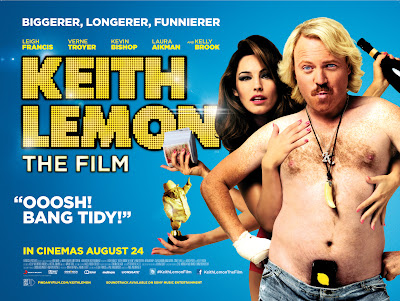 Ooosh – if you’re looking for a bang tidy night out at the cinema, you’re cordially invited to lose all inhibitions, drop any semblance of taste or decency and let Mr Keith Lemon (businessman of the year ’93) set about you with his own brand of crude comic craziness...

Up until now Keith Lemon (Leigh Francis) has been a small screen alternative comedy phenomena with Bo’ Selecta, Celebrity Juice and Keith Lemon’s Lemonaid. Lemon is famed for his sexist Yorkshire ways, he sports a “strawberry blonde” mullet and ginger moustache.

Now unleashed on the big screen in Keith Lemon: The Film by Writer / Director Paul Angunawela, the pervy Lemon might just have bitten off a bit more than he can comfortably chew. 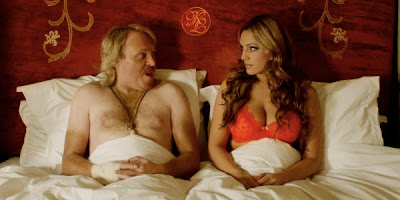 "do you come here often?"

This is the charmless tale of how Lemon went from struggling loser salesman to overnight billionaire sensation thanks to his un-P.A.T. tested ‘Lemon Phone’. Without a meaningful plot to run with, the film lurches from one comedy set piece to another, sure, some are very funny, most of them are very rude and the whole proceeding is propped up by a mass of celebrity cameos from the likes of Verne Troyer, David Hasselhoff, Tinchy Stryder, Gino D'Acampo, Chris Moyles, Phillip Schofield and Rizzle Kicks to name but a few.

Keith Lemon: The Film does have one major selling point thought and it shameless uses it all the way through – Kelly Brook in her underwear… Brook proves that she’s game for a laugh as she lampoons herself and flashes her curvy body for the camera and Lemon to slobber over. Laura Aikman does her best to compete as Lemon’s pregnant girlfriend Rosie, who gets kidnapped by ‘Evil’ Steve (also played by Francis).

This is the very definition of a ‘hit and miss’ film, there are parts that are brain-damagingly rubbish and altogether cringy but there are also some (if not enough) quality laugh-so-much-you’ll-hernia sections which offer redemption for Lemon fans. 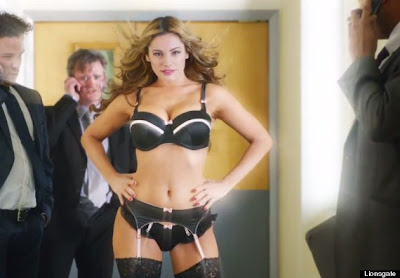 Bodily function gags abound and no area of sexual crassness is left undisturbed – at times the sheer amount of celebs on screen makes it feel like you’ve wandered inadvertently into a VIP Green Room sexually charged drinking session.

Keith Lemon: The Film should not be approached by the squeamish or easily offended, as you’ll likely leave the cinema traumatized, but for those who are devotees of Francis’s madcap OTT sex-comedy, there is probably enough here to satisfy until the threatened sequel!?

ööö – One for Lemon lovers only

Laughs öööö – will smash your laughter back doors in