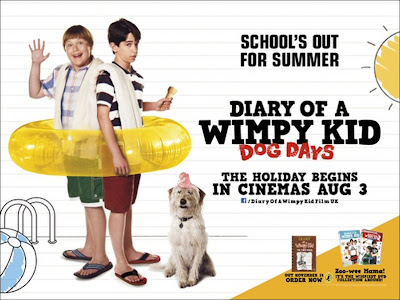 The full awkwardness of the kid / teen frontier is the source material for Jeff Kinney's best-selling series of tweenage novels on which this film is based. The Diary of a Wimpy Kid books have been read and loved by my two boys and the films (this is the 3rd one) have been likeable enough fun packed inoffensive comedies.

The ‘wimpy kid’ in question is Greg Heffley (Zachary Gordon) – a young chap with summer vacation plans, chiefly these include playing video games every day and getting the lovely Holly Hills (Peyton List) to be his girlfriend. But his dad, Frank (Steve Zahn), has other ideas that include a possible work placement, outdoor sports and a camping trip with a oddball boyscout troop.

Greg’s summer seems to be saved when his best friend Rowley Jefferson (Robert Capron) takes him to his country club where he can swim, relax and enjoy the facilities – which allows him to escape his work placement. An added bonus is that Holly is a junior tennis coach at the Club so he may just have chance to impress her and find young love… 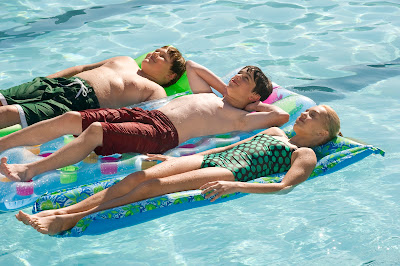 Of course things do not go smoothly and various mishaps befall Greg such as accidentally skinny dipping in the pool when his trunk snag on a diving board. He also doesn’t realize that the waiter service smoothies actually run up a bill on his friend's family's tab.

There are some really funny moments, pick of the bunch are when Greg’s inadvertent 911 call sees his best pal’s dad getting assaulted by police officers, and his older brother’s disastrous gig at the ‘Sweet Sixteen’ party of Holly’s older sister.

The young cast are good value, Gordon has made the lead role his own and the returning characters from the other two films all add some nice touches – this is one series of films that has maintained a good standard thanks to having the book series to follow rather than adding spurious cash-in sequels. 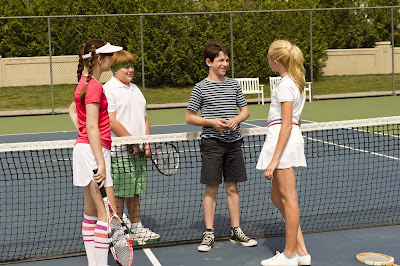 "the girls vs the boys"

Diary of a Wimpy Kid: Dog Days is a fun summer holiday all age crowd pleaser. It will make you laugh out loud and also offer a modicum of insight into the struggles of growing up. Makes a nice change to see a film that doesn’t have to gross out the audience in the name of comedy. Recommended.

3.5 – escaping childhood today on a screen near you

Babes ööö – Peyton might be a babe one day