Q: What is it that is exactly the same about every single vacation you have ever taken?

22 years ago director Paul Verhoeven's blew a mega-budget on making a full-on funky sci-fi action blockbuster – based on a Philip K. Dick short story "We Can Remember It for You Wholesale."

Schwarzenegger was at the height of his ass-kicking powers and this tale saw him discover that his entire life had been ‘invented’ to keep him from meddling in a dastardly scheme for planetary domination on Mars. 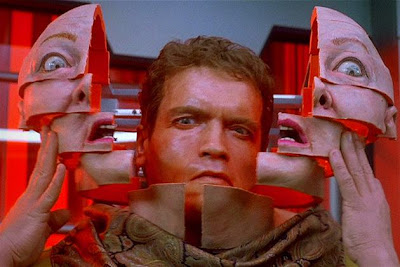 The pleasingly mind-bending plot was backed up with some Oscar-winning special effects and great OTT violent action scenes, which saw Arnold, work his wooden magic as a believably clueless hero Douglas Quaid construction worker. Director Paul ‘Robocop’ Verhoeven loves a bit of gratuitous bloodshed and he makes 2084 a time of utter carnage…

The plot sees Doug haunted by a recurring dream of the red planet. He goes to Rekall – a company who sell implanted but when he tries to buy a memory of Mars something goes wrong. He finds out that he is actually a top secret agent fighting against an evil Mars administrator Cohaagen (Ronny Cox). 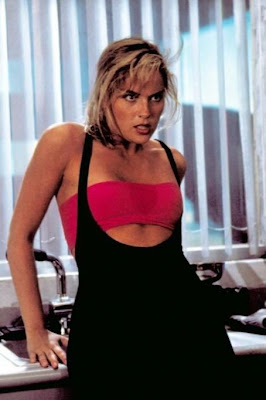 "I'm not actually your wife"

The action is cracking stuff and it holds up well after all these years. The new Colin Farrell starring remake will have to its work cut out to top the sheer energy and balls out thrills here.

The special effects now look a bit quaint but there are some that bring a massive smile to the face when you immediately remember the classic bits such as the infamous 3 boobed woman and the fake large “get ready for a surprise” head that Arnie wears at one point.

This release of Total Recall is packed with great extras too – pick of the bunch is the restoration comparison featurette, which shows up just how amazing the Blu-ray visuals are. All the features are worth a watch for fans though but the film just looks so flippin amazing this is a triple A Blu beast! 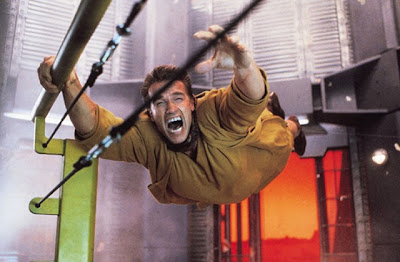 "Arnie hears about the remake..."

Total Recall is a quality sci-fi blast of a movie. The words ‘classic’ and ‘all time great’ are ones that belong to this film and this disc is the best version yet to pick up! 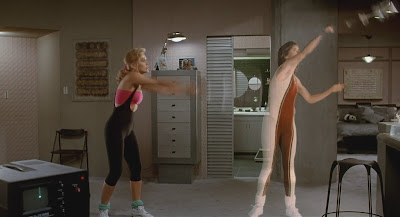