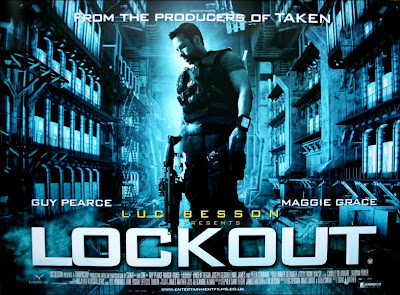 “Don't get me wrong. It's a dream vacation. I mean, I load up. I go into space. I get inside the maximum-security nuthouse. Save the President's daughter, if she's not dead already. Get past all the psychos who've just woken up. I'm thrilled that you would think of me.”

In the near future a guy named Snow (Guy Pearce) – you know, a tough heroic type – well he gets locked up for a crime he didn't commit after a heavy duty fight in a hotel over a mysterious briefcase. Well it’s not good news for Snow because maximum security prison now means a space prison called MS-1 and he’s down for a thirty-year stint in cryogenic stasis. But wouldn’t you know it… MS-1 gets overrun by the scumbag inmates – just as the president's sexy daughter, Emilie (Emily Grace) is visiting on a humanitarian mission. So it’s down to Snow to either go in and save her or do his time inside. 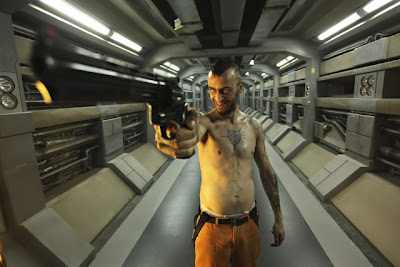 Snow is a great antihero, which Pearce brings to larger than life chain-smoking, wiseass cracking, buffed to the max glory. He’s like a modern day Arnie killing baddies and making funnies in equal measure.

Look out for the excellent 'voice activated grenades' which are used to brilliant comic effect...

The directors James Mather & Stephen St. Leger are the geniuses behind my all time favourite short film ‘Prey Alone’ (Darkmatters Review here) which they made themselves – including the jaw dropping special effects. The CGI in Lockout isn’t the highest spec but it’s hard not to get caught up in the sheer excitement of a white-knuckle future bike chase / shootout which packs insane video game styling.

Pearce is superb in a very different role to his normal higher brow stuff and the script penned with help from Luc Besson is top notch B movie fun. He’s up against the 500 angry convicts led by evil Alex (Vincent Regan) and his totally psycho brother Hydell (Joseph Gilgun). 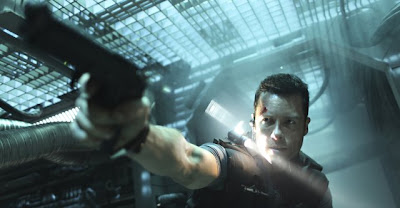 The violent mayhem that ensues is of the running, gunning and shoot-em-up kind – with obligatory funnies that just keep hitting the mark such as when Emilie proves she can lay down convincing amounts of suppressing automatic gun fire, Snow quips “I didn’t have you down as a Democrat.”

If you're in the mood for a fast paced, superior thrill ride that comes with all the sci-fi trimmings - even including a brief spaceship fighter assault on the prison which has echoes of the attack on the Death Star - step this way! 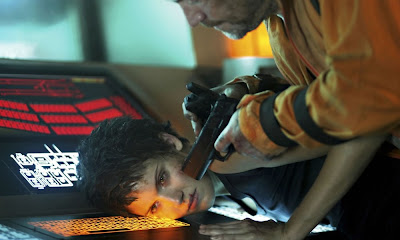 Lockout is a fantastic fun sci-fi action thriller that ticks all the boxes. It feels like the best of the old school b-movie romps updated for the 2012. Highly recommended!!

hello would it be possible to exchange links?
I recently restarted my movie review blog:
http://www.packreviews.net/

Thanks for reviewing Lockout, Matt. Just before leaving my office at DISH on Friday, I went online and rented Lockout. It downloaded to my Hopper and was ready to watch before I got home. Lockout wasn’t a bad movie, but I cannot help but make the Escape from New York comparisons. I don’t know if they are making a sequel to Lockout, but they could call it Lockout: Escape from L.A!