Darkmatters Review: A Touch Of Cloth 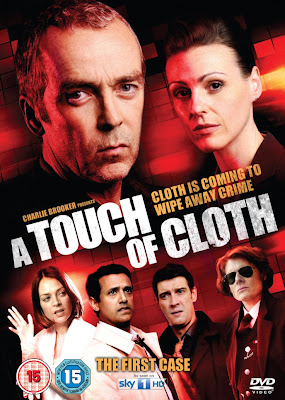 Charlie Brooker - genius media chewer / creator of Nathan Barley, Dead Set, and Black Mirror has ripped up the murder mystery genre with his latest: A Touch of Cloth. Playing as a feature-length crime drama spoof-em-up, in the vein of Airplane or Naked Gun – ‘Cloth’ stars John Hannah and Suranne Jones as wonderfully dysfunctional police partners. 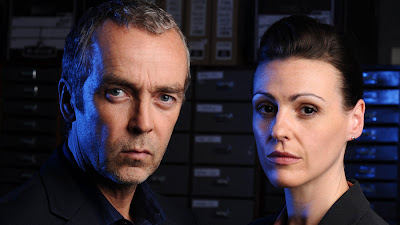 The plot sees driven cop Jack Cloth (Hannah) trying to get by in a Max Payne kind of existence – he’s turned to alcohol in order to deal with the death of his wife (who he sees in ghostly visions). In a moment of excellence – of which there are many - his backstory is told in a series of newspaper cuttings which he has framed on his wall. Enter Anne Oldman (Jones) as his new partner whose warrant card describes her as "100% Tits and Ambition." 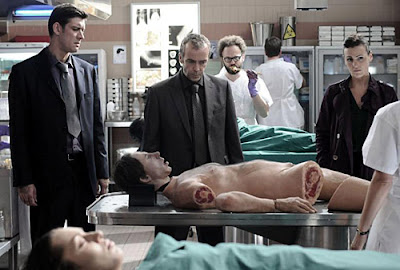 Together the pair investigate a series of increasingly grisly murders and find themselves on the trail of a devious killer. As you do. If you’re a detective. The case leads Cloth and Oldman from leafy forests to sinister lock-ups, from the luxury home of an arrogant TV chef to the cold dissection rooms of vampish forensic pathologist, packing in as many jokes as humanly possible along the way.

Double entendres mix it up with razor sharp one liners, killer visual gags and laugh out loud moments – A Touch of Cloth isn’t just a meta-spoof of every recent crime show, it forges a fantastic new reality and blows the bloody doors off.

The DVD is out 03 September and more episodes plus a feature film length one are in production!!

"Suranne Jones - has a lot of front!"