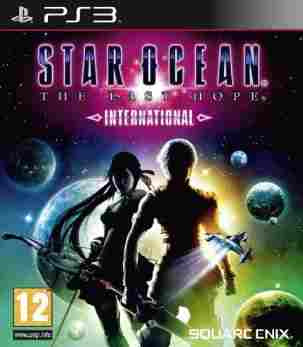 In the aftermath of World War III, Earth has been ravaged and the population decimated by the highly toxic, nuclear fallout rich, environment. We certainly made a good job of screwing up our world… 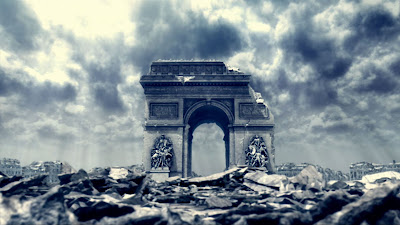 "well done humans... there goes the planet!?"
So the countries that survived band together to find a solution for mankind, their solution is to form the ‘Greater Unified Nations’ and seek a new beginning - in space. And Star Ocean 4: The Last Hope – International Version is the resulting adventure games that lets you chart the future of humanity by packing a huge sword and using it on the many and various alien creatures you’ll meet as you boldly go where no man has gone before.

I say ‘man’ but step forward ‘Edge Maverick’ (obviously the love child of a brainstorming session where all the participants had seen Top Gun way too many times and kept repeating lines like: “Maverick, I’ve lost the Edge!” etc etc) – he’s the ‘edgy’ and ‘maverick’ hero of the piece. He’s a classic blond haired teen rebel from the vaults of Square Enix – as seen in many a Final Fantasy!?
Also on hand in order to offer that winning combination of cute / sexy/ kick ass girlfriend material wearing leather hot pants is Edge’s childhood friend ‘Reimi Saionji’. She’s a manga pin up girl who shoots a bow and has the camera pan over her pert buttocks whenever she wins a battle (what were the makers thinking!?). These two are soon joined by ‘Faize’, he’s a space elf / Eldar who comes on board as your party’s first magic wielder. 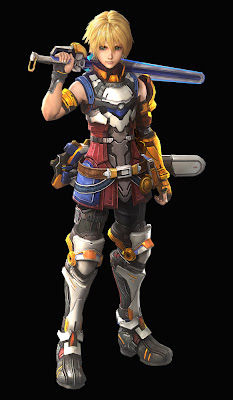 "Edge by name, edgy by nature"
As is the way in these games, your party continues to grow so you can utilize various skills from allies that include Bacchus D-79 (a self created cyborg),Meracle (a teenage cat-girl) and another female Lymle (she’s only 15) in your intergalactic butt kicking adventure.
You get a funky spaceship too – ‘The Calnus’ which allows you to whizz back and forth to and from various planets.
Star Ocean 4: The Last Hope is a great adventure game and draws heavily from the Final Fantasy series (both made by Squre-Enix). It was first released on the Xbox 360 but suffered from long loading times, having to swap discs between missions and some glitches… But even with all that it still went on to become the biggest selling Xbox 360 game in Japan! 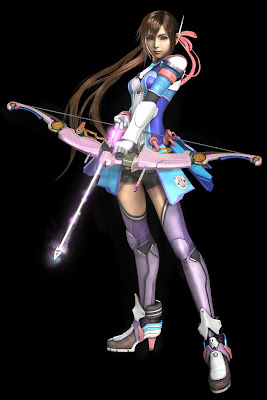 "she shoots, she scores"
Square have thankfully addressed the Xbox issues with the PS3-exclusive International version which is head and shoulders better than the 360’s version.

What’s so good about Star Ocean4? Well it has a fantastic ‘active battle system’ that lets you chain both magic and physical attacks. Your attack options can also be upgraded in a similar way to White Knight Chronicles – more on that when we get the PAL version. This coupled with the cool graphics and fun plotline will see you right for many hours of happy adventuring!

Nice to see the PS3 being used to make Xbox360 games better – don’t settle for the gimped Xbox version, Star Ocean shines much brighter on the PS3!!