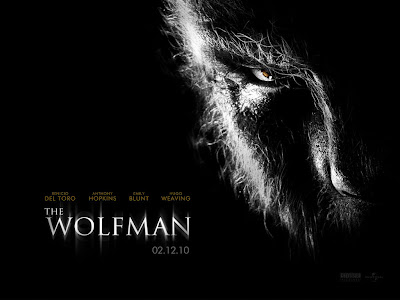 It is said that “even a man who is pure in heart and says his prayers by night, may become a wolf when the wolfsbane blooms and the autumn moon is bright...”

Things certainly get a bit hairy at the cinema when The Wolfman bounds back onto big screen in this lavish remaking of the 1941 ‘classic’ tale of horror. Here we have hairy Lawrence Talbot (Benicio Del Toro), a leading actor who returns to his ancestral home when his brother goes missing. Upon being reunited with his hairy father (Anthony Hopkins) Talbot learns that his brother’s body has been found ripped to pieces by either a wild animal or a maniac. Whilst out in search of the attacker, he too is bitten by the monster but Talbot survives and is nursed back to health by his brother's widow, Gwen (Emily Blunt).

Director Joe ‘The Rocketeer’ Johnson goes all out for sumptuous gothic look and feel – so prepare to see no end of eerie mists and shots of racing clouds in front of moon. It is alas a case of style over substance as the creaky plot brings nothing much new to the werewolf genre which is finally getting a little long in the tooth in the face of the vampire onslaught which shows no sign of abating.

The special effects of the painful looking transformation scenes are probably the most eye-popping man to wolf conversions since the famous American Werewolf in London and use a pleasing mixture of make up seamlessly fused with CGI trickery. You’ll wince as bones crack, fingers stretch into claws and hair – so very much hair - bursts out of every pore. All this effort though is undone when you behold the final wolfman beast as he looks almost as unconvincing as the 1941 version.

The action scenes that looked so promising in the trailer are mostly bland affairs alas. Limbs are torn off frequently and the body count invariably rises with every full moon but what should be horrifically chilling and disturbing comes across after the first couple of attacks as ‘seen one CGI decapitation – seen em all’.

Police inspector Abberline (Hugo Weaving) is the man tasked with bringing the beast to justice, which might be easier said than done with the prospect of more than one lycanthrope howling into the night sky.

The door is left well and truly open for a hairy sequel too but on the strength of this effort, we can only hope that fangs sharpen up if it gets the green light.

The Wolfman is transported by a gypsy curse to a deathmatch where he has to face off against all the werewolves from films such as American Werewolf, The Howling, Wolf, The Company of Wolves, Wolfen and Twilight etc - until only one remains... Wolfman goes down like a pussy in the first round to a sub standard CGI werewolf from Underworld!?

I can't to watch this movie. Hopefully they will release a 3s version of this movie