Darkmatters Review: Let Me In 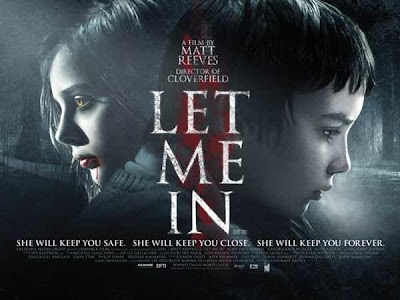 Prepare yourself for the best horror film of the year. Let Me In (a remake of excellent Swedish masterpiece ‘Let The Right One In’) does for vampires something that a million Twilights, True Bloods or Vampire Diaries can only hope to – it grips the very soul of the viewer and never lets go.

If you’ve seen Let The Right One In you may be sceptical that a US remake could come anywhere near to capturing the haunting, dreamlike understanding of the acute alienation experienced by damaged tweenagers. But from the icy, snow covered New Mexico opening shot, to the unnervingly hopeful very last frame, Let Me In somehow manages to add a compelling new slant on the source material from John Ajvide Lindqvist’s novel.

Let Me In is the story of twelve year old Owen (Kodi ‘The Road’ Smit-McPhee, who looks like a young Gareth Bale). Bullied unmercifully at school and drifting apart from his newly single mother, Owen is a lost soul in desperate need of a friend. It seems his lonely prayers have been answered when Abby (Chloe ‘Kick Ass’ Grace Moretz) moves into his block of apartments. Cool, confident and adverse to wearing shoes – even in the snow, there is something special about Abby, something different, something dangerous.

The two children carry this bittersweet story on their young shoulders and both deliver amazingly assured performances. In Let Me In the adults take a back seat and director Reeves even cleverly keeps Owens’ mother’s face always just out of focus as a clue to his sense of disconnect with her. Other adults in the plot include Richard Jenkins as Abby’s ‘Father’ and Elias Koteas as the detective tracking the escalating string of unexplained grisly murders – both supply quality, understated support. 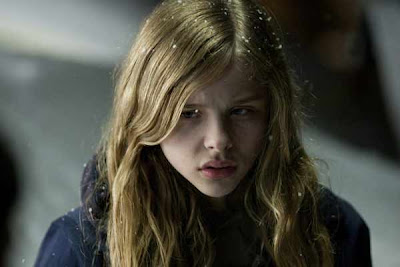 "It's just that I've been 12 for a very long time"
This is a deep dark tale, that takes in gut wrenching violence one moment and sweet shared youthful friendship the next. If you haven’t seen the original I’d recommend seeing Let Me In first as it is probably more accessible (my wife said that ‘Let The Right One In’ was probably the freakiest thing she had ever seen).

Matt Reeves has created a fantastic, tragic, heartbreaking classic horror experience that will stand with Near Dark and The Lost Boys as one of the coolest vampire films of all time. Gird yourself and seek out Let Me In as soon as possible (then buy Let The Right One In on DVD too!).

Abby meets Edward Cullen from Twilight and beats the living daylights out of him for being such a pussy. 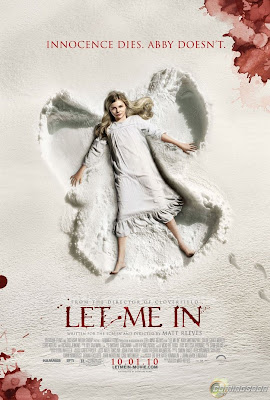 "Eat some now, save some for later..."
Watch the trailer here

Email ThisBlogThis!Share to TwitterShare to FacebookShare to Pinterest
Labels: Chloe Moretz, film review, let me in, Let The Right One In, matt adcock

Great review Matt. I haven't seen it myself yet but desperate to.

Have you read the book? I did after watching the original and thought it was a much richer experience and there should have been a couple of key moments in the film.

How does the new version compare to the book, if you're read it that is.