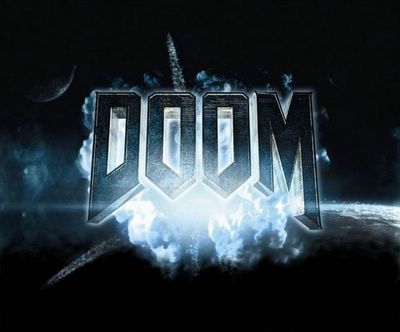 "Doom by name... and doomed by nature" 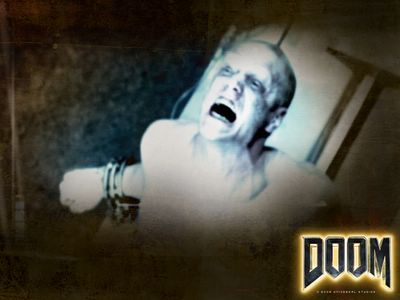 “You’ve got a hair triggered gun to your head...
A bus full of young nuns is on a freeway and there’s a nuclear bomb on their bus.
Up ahead is a ‘children of courage’ rally where hundreds of brave little kids have gathered to be honoured.
The timer on the bomb on the buss full of nuns is set to go off just as the bus gets to the centre of the children’s rally.
- Think fast

You’re in a movie theatre which the buss will pass in just one minute, the trailers have played (Narnia, King Kong, Underworld 2 etc) and now Doom the movie is about to start – you have to make a choice, you’ve only got time to do one thing, will you leap onto the bus and try to defuse the bomb, knowing that it’s an impossible task and will mean your certain – albeit heroic - death, or will you kick back and watch the movie?”
Time’s up…

Sorry, anyone still watching the movie made the wrong choice: DOOM is the nastiest, most life negating, intense neural torture released in 2005. The word ‘turkey’ in no way does justice to just how bad this film is. DOOM is an affront to your human rights to be entertained in a movie theatre… Everything about it is major league shoddy, it really is a stinker of epic proportions. And it pains me to say this because I loved the games DOOM 3 especially, and generally an a big fan of sci fi action no matter how stupid it is…

The only good thing about DOOM is the gorgeous Rosamund Pike who plays a sexy researcher ‘Samantha Grimm’. Grimm by name and grim by nature – she’s on Mars finding out if the 10% of the human genome is still unmapped might be the genetic blueprint for the soul. The best scene of the film is of Dr Grimm walking along a corridor – check the photo below (not from the film but of miss Pike) and you’ll notice that she can certainly ‘stand out’ when she wants to… 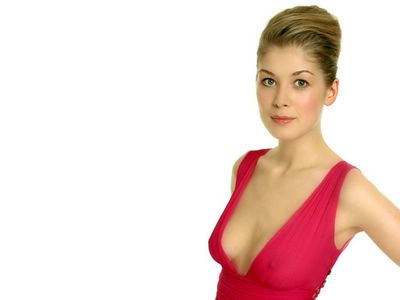 "great dress and 'firm' proof that she's all there!"

Anyway, my life force has been so drained by sitting through DOOM that I can hardly bring myself to go on. Needless really to say that ‘The Rock’ is rubbish, the effects budget is wasted, every scene is dull, and the good name (of the game on which the film is based) is lost forever.
All I can hope is that it’s not too late and that you read this before subjecting yourself to a fate worse than death.
Hey – it’s not too late to catch that bus!! 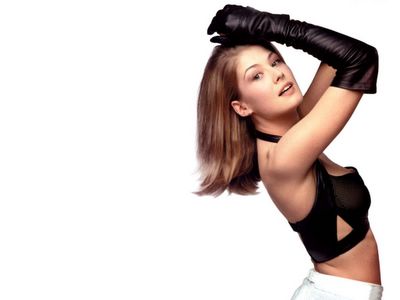 "Rosamund Pike - too good to be in this awful movie, please don't let her career be 'doomed'"
Darkmatt Rating: ö (a one way ticket to hell for your entertainment senses)
Reviews of other films and stuff you might want to read indexed here
Posted by Matt Adcock at 8:07 am

Man i cant believe that i missed this film! will you take me again another time?! And i have a confession to make - i quite like 'the rock' in the films i've seen him in...