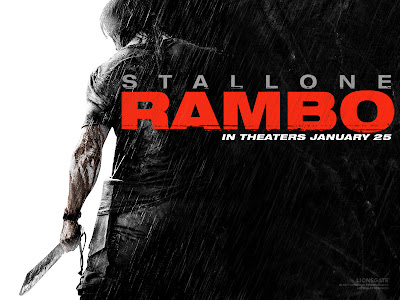 My name is John Rambo, I’m a battle hardened Vietnam veteran with a heart of gold and propensity for violence – usually knives, bows or with large calibre weaponry. You might have seen me fighting the Afghanistan war single handedly a few years ago but now you can catch me as I lumber out of retirement in order to kick the butt of the entire Burmese military.
I generally try and do what’s right, so when some ‘nice but dim’ do gooding US missionaries get themselves captured by the serious nasty Burmese baddies – I don’t have much of a choice except to get my iconic bow and arrow out and join a bunch of mercenaries on a suicide mission to try and save them.
Erm, that’s pretty much the entire plot, but who needs a decent plot when you can have a massive grisly body count? The last half an hour of Rambo delivers probably the most intense carnage per second of any film, ever. If you’re looking for voyeuristic violence as a stress reliever and have the stomach for on screen highly detailed body part rich explosions – Rambo delivers over and above the call of duty.
The message of this film seems to be that brutal aggression with very large machine guns can solve any political or diplomatic problem. Moreover pacifism is only for people who don’t really understand the dark hearts of the Burmese army (I mean these guys bet on racing innocent captives through mine fields for fun!?) The only thing that these monsters understand is the business end of a large gun.
You could try and look for deeper meaning in my actions – perhaps I have genuine inner torment and human spirit pessimism issues? Nah, the truth is that I’m just gifted at blowing people to little shreds with any weapon to hand, or my bare hands if none are available. You don’t have to like it but as I said – for big screen bullet ridden carnage – nothing comes close.
So after successfully shuffling Rocky back onto the stage for one last bout, it seems that Stallone wanted to send Rambo out in an even bigger blaze of glory (he wrote and directed as well as starred in this rabidly gung-ho slaughter by numbers). And if this makes money at the box office, who knows where it will end? Could we see Cobra snarling back at us from the big screen soon? The mind boggles.

Endorphin Stimulation: öööööö (6)
- No braincells required, but an appreciation of gunplay stimulation.

Tasty Action: öööööööö (8)
- The last half an hour is like Saving Private Ryan's beach scene (in a paddy field)...

Mind Blight / Boredom: ööööö (5)
- Not enough time to get bored once it kicks off.

Liable to make you:
"Look at your grandad in a different way"

DM Poster Quote:
“Live for nothing, die for something (unless it's another a sequel?)"