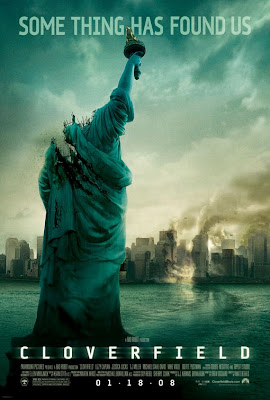 After standing strong in the face of terrible terrorist atrocities and soul destroying stock market crashes, New York has finally been comprehensively taken apart and there’s absolutely nothing we can do… except record it on camcorder of course.

Cloverfield is a film that I have been really looking forward to, and this is without knowing virtually anything about it. So hats off to a fantastic marketing campaign which has used the web in a way that only perhaps The Blair Witch Project has managed before –drip-feeding film fans with tasty snippets of info. Of course the carefully ‘leaked’ money shot of the Statue of Liberty’s head being blown off and smashing to earth in a residential Manhattan street help up expectations somewhat – and now finally the mystery is unveiled on the big screen.

If you don’t know any of the plot and want to keep it that way skip now to the end paragraph which begins with ** - Cloverfield you see is a monster movie par excellence and it’s better the less you know about it.

It seems that something somewhere (be that the depths of the ocean, in the darkness of outer space or from a scientific testing ground) has been watching Godzilla flicks and thought ‘I could do that’ – a case for the corrupting influence of films perhaps? So we get a large angry mutant alien of some kind laying waste to New York. Nobody knows why but that doesn’t really matter – we get to witness the attack through the viewpoint of ‘everyguy’ Hud (T.J. Miller – no you probably haven’t heard of him) who handily wields a virtually indestructible camcorder with battery life which Duracell can only dream of. It all kicks off during the farewell party for ‘nice and slightly heroic guy’ Rob (Michael Stahl-David – nope not heard of him either), who is off to Japan for a dream career move. Seems he’s gone and fallen for his best friend, ‘good looking but vacant’ Beth (Odette Yustman – who?), so when the creature’s attack leaves her trapped and injured, Rob has to do the macho thing and risk life and limb to try and save her.

** Director Matt Reeves has teamed up with ‘Lost’ genius J.J. Abrams and the result is the best slice of big screen monster mayhem that you’ve seen for some time, but it might not please everyone. Prepare yourself for an overload of shaky ‘on the run’ camera angles and seemingly unscripted dialogue. Cloverfield is a love story at heart and whilst some of the people who I saw this with expressed a wish to see more of the uninvited party crasher, this is no Godzilla 2. In fact one ‘loudly whingeing cinemagoer’ Kate John told me that she’d “never been so bored, but liked the bit where the monster went ‘raaagh!’” – Hhhmmm, make of that what you will…

Mind Blight / Boredom: ööö (3)
- somepeople seemed to find it dull, I wasn't one of them!?

Arbitrary final rating: öööööööö (8)
- When the world ends... It will be on tape baby!!

Liable to make you:
“invest in a camcorder 'just in case'"

DM Poster Quote:
“see that creature on You Tube? It wants a word with you... ” 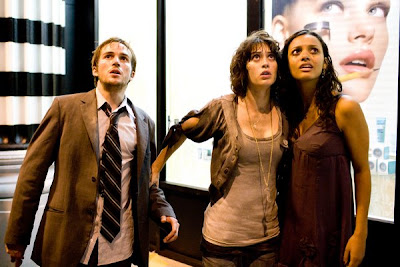 "that's so freaky even the poster girl is checking it out!?"

sorry if my sister and i were too noisy on Friday. My rebuttle to your review (and Empire's) is on my new blog, katerinajuan@blogspot.com. See you around, kate.

I love rebuttles! Blogging has got so interesting recently...