Rollin with the Nines - review (love that car chase!) 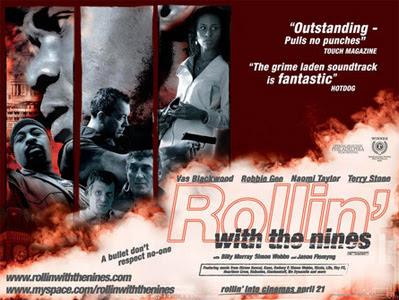 Car chases eh? I’m a sucker for a good car chase but it seems that they come few and far between these days. Personal favourite car chase scenes include the edge of your seat thrillers from Bullit, Ronin, Bourne, Matrix Reloaded and even Bad Boys 2 but as that last example might illustrate, a great car chase can be found in a not so great movie and that’s what we have with Rollin with the Nines.

This movie from director Julian ‘Rise of the Footsoldier’ Gilbey has a superbly constructed, filmed and executed car chase which features a customised Golf V6 being pursued through British woodlands at high speed by some dodgy cops in what looks like a Vectra? This is a really cool scene and it shows progression from the ‘test run’ version of a similar chase that is included on the ‘Nines’ DVD extras as a short film called ‘Driver’, although that 4 minute chase is almost worth getting the DVD out for on it’s own!!

Anyway – the exciting car chase and a decent (and very bloody) shoot out in a crack house are the only scenes of any real merit in this nasty crime thriller that suffers from weak acting (from a not untalented cast) across the board.

Gilbey can direct, and if you like this I'd urge you to check out ‘Footsoldiers’ as it shows that he’s on the cusp of making a fully decent movie – I’m going to be waiting in anticipation of what he does next…

Mind Blight / Boredom: ööööö (5)
- Some of the dialogue is painful.

Liable to make you:
"Think twice before launching into a career selling drugs"

DM Poster Quote:
“Crime does not pay, but it does look exciting speeding away from the Filth in a stolen car"