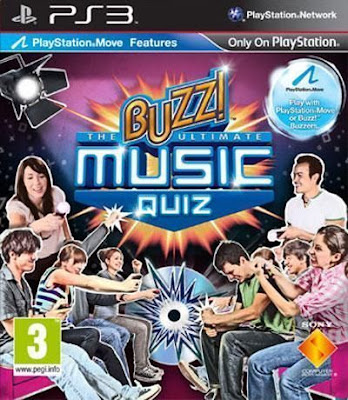 The name’s Buzz! and I’m here to quiz you…

People say that I’m the smoothest Buzz-tard in town – and yes, when Buzz! is in the house, I’ll make your PS3 rock you up a quizz-tastic good time.

If you have a PS2, PSP or PS3, you’ve probably played a Buzz! game, and if you haven’t – you really should have because they are superb examples of quizzes with their own Buzz! buzzers to play with. The latest title, Buzz! The Ultimate Music Quiz, jumps into the era of the PlayStation Move controls on PS3 and is (if you’re slow on the uptake - a quiz video game about music!?). 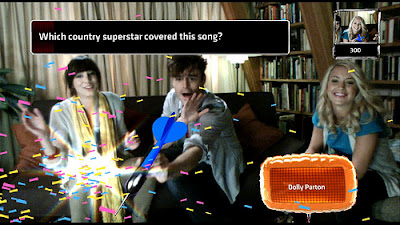 "take that PDC Darts Championship!?"
Buzz! The Ultimate Music Quiz is now looking better than ever and the genius inclusion of support for PlayStation Move makes this the best Buzz! game yet. Everything is sparkly scrubbed up and generally improved – from the looks of the characters (Buzz himself – still Jason Donovan – looks less like a mutant cartoon and more like a proper host), whilst he studio glistens in high definition glory. Players can now photo and map their own face onto their Buzz! character, a bit like TV Superstars and record a custom buzzer sound which brings you closer to the action. You can still use the excellent custom questions made and uploaded by other players.

Basic gameplay sees any number (well up to four if you want to be picky) of players battling through quiz rounds such ‘Fastest Finger’ etc. New to the music quiz is ‘Twisted Tunes’ which is brilliant addition in the vein of a club singer distortion which you need to identify. Throw in some cool bursts of music videos and a decent range of questions either on wide topics like ‘No.1 Hits’ or more specialist topics like ‘Lady Gaga’. 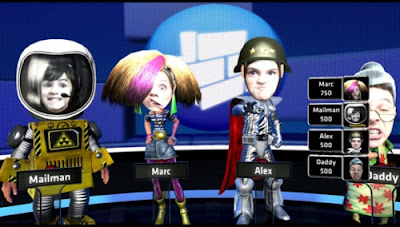 "this is where you get to put your face on your players"
Bringing the PlayStation Move brings four bespoke rounds where you’ll use the controller to pick / smash answers, stab incorrect answers, pick up and slide answers to a bin or – my favourite - shoot the correct answer. It works really well and adds a new dimension to the whole Buzz! experience.

Buzz! The Ultimate Music Quiz takes what was already a great game and adds even more functionality and ‘bang’ for your buck. This is going to be the quiz you need this festive Season and music / trivia lovers will be well served with this slick and engaging game! Get your Move on and play this sucker!

Business Quiz said...
This comment has been removed by a blog administrator.
7:15 pm