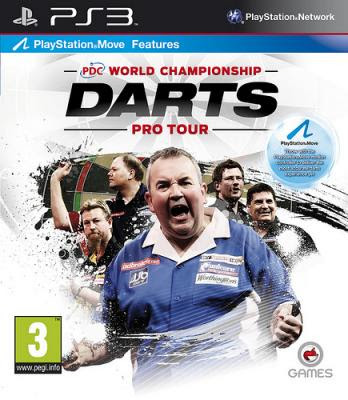 As legendary darts commentator Sid Waddell once said: “The atmosphere is a cross between the Munich Beer Festival and the Coliseum when the Christians were on the menu.” Yes it’s PDC World Championship Darts: Pro Tour being played using the PlayStation Move motion control technology and it’s getting a bit tense…

I’m stepping up at the Oche, my PlayStation Move held like a ‘dart’, I aim at the treble twenty – I need this then double 17 to finish – there is an audible hush from the crowd (well my two sons and cat) as I let fly… 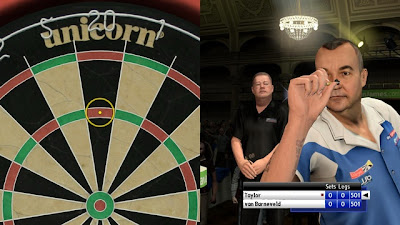 "Only the best looking men step up to the Oche"
PDC World Championship Darts: Pro Tour on PlayStation 3 is the nearest thing you’ll get to actually picking up some darts and throwing them towards a dartboard… The game is uncanny in accurately capturing your gestures and measures your throw – which means two things:

1. If you’re cack at darts in real life – you’ll be hopeless at it virtually

2. It’s a brilliant laugh when played against friends and family for bragging rights.

I’m told that professional darts players have a preferred land angle to their dart, which allows them to plan their shots to the board to allow the maximum possible room on the board for that third dart into the Treble Twenty zone – alas that doesn’t apply so much to me as I scored one 180 hand in all my review games!? You see PDC World Championship Darts: Pro Tour isn’t for noobs or the hand / eye uncoordinated (me). This game brings such a whole new level of realism to the PS3 that you almost expect to catch the whiff of beer and large men with moustaches coming from your sleek black games machine. Graphically – this is amazing, the glamorous dart venues such as Bolton are brought to high definition life whilst the facial hair and worry lines of the competitors are meticulously rendered. The darts themselves and the target board are crisp and detailed.

If the motion control of the Move is highlighting your weakness then you can still play with the trusty DualShock which uses a Tiger Woods style control stick back / forward flick that works nicely but doesn’t feel as ‘real’ as the Move.

O-Games has also brought online 1-on-1 matches to the PlayStation 3, as well as PDC World Championship Darts: Pro Tour featuring a raft of downloadable content support on PSN: including new players, events and darting accessories. 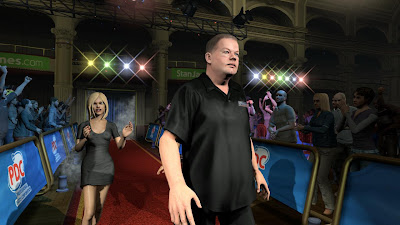 "Leave it woman, I've got some darts to play!"
If darts is your thing you might want to check out how PDC World Championship Darts: Pro Tour is teaming up with PDC darts referee Russ Bray in a Facebook search for the public’s own interpretation of Bray’s famous ‘180!’ catchphrase. Entrants are encouraged to film a short video of themselves saying ‘180!’, and then share it with the official PDC World Championship Darts: Pro Tour community by uploading the video to the official Facebook page at www.facebook.com/pdcworldchampionshipdartsprotour  to win some prizes.

It takes a little practice but you’ll be taking part in tournaments, including the Grand Slam of Darts, a new fixture in the PDC events calendar in no time. The atmosphere is enhanced with the commentary from TV’s ‘Voice of Darts’ Sid Waddell and John Gwynne; top level match referees, Bruce Spendley and Russ Bray; and Master of Ceremonies, John McDonald.

Basically – if you want darts action without the actual darts – this should be your next purchase – I’ll see you online!