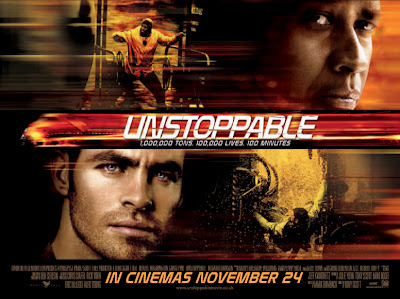 Attention travellers we are sorry to announce that the train on platform 3 is unmanned, out of control and carrying a dangerous payload of highly explosive chemicals. We apologise for any inconvenience this might cause but hey, let’s look on the bright side, it makes for awesome cinema!!
Nobody does macho action films quite like Tony ‘Top Gun’ Scott and Unstoppable sees the high velocity loving director let loose with a massive train set, backed up with helicopters, cop cars and explosions – lots of explosions… Denzel Washington brings his class to the lead role of Frank – a world weary engineer tasked with training newbie conductor Will (Chris ‘Kirk from Star Trek’ Pine) who is having women trouble.

These two decent chaps get caught up in this "inspired by true events" tale where an unmanned runaway train is out of control in southern Pennsylvania and threatening to derail in a highly populated area – killing thousands.

The simple ‘men versus machine’ plot serves the film well and allows for lots of macho posturing as the train bosses fret over how much their stocks will be hit if the train crashes while the heroic dynamic duo frantically try and bring the beast of the train under control.

It couldn’t be more formulaic but Scott knows how to build up the suspense and uses his whizz bang filming style to frame the speeding unmanned locomotive 777 as some kind of evil entity hungry for destruction. 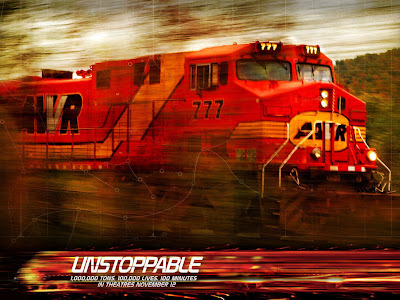 "The chance would be a fine thing - given the delays facing UK commuters at the moment"
Train control room operator Connie (Rosario Dawson) is on hand to fret as the runaway train finds itself on a head to head course with various hazards including a trainload of innocent schoolchildren… You couldn’t make this stuff up… The supporting cast include Frank’s two unfeasibly attractive daughters who happen to work in ‘Hooters’ which gives them an excuse to spend the whole film in hot pants and tight t-shirts whilst looking concerned at the news coverage of their brave dad. Not to be outdone though Will has a smokin’ hot blonde wife who’s unhappy with him do to his suspecting her of infidelity – although maybe his ‘day-saving’ actions might win her round?

Unstoppable sure is stupid and shallow but it is also, unbelievably, the most fun you’re likely to have in the cinema this autumn. With dialogue like: “This is Will Coalson your conductor speaking, we are gonna run this bitch down.”

All aboard for a pleasingly edge of your seat white knuckle ride - book your tickets ASAP and hold on tight!

The Road Train from 'Road Train' turns up and goes head to head with the 777 from Unstoppable in the ultimate game of 'chicken' not realising that there's no way the 777 can turn off the tracks!? It gets very messy!