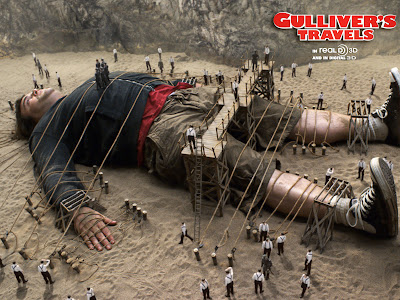 
Hear that rumbling, is it thunder, is it heavy traffic? No, that’s the

novel) turning in his grave as Rob ‘Monsters and Aliens’ Letterman

to the big screen.

guy who's been underachieving all his life. Stuck in the same dead-end

lacking the balls to actually ask her out.

there for an ‘on the location’ report. No sooner has he set off when

Lilliput where he’s a giant in size to the tiny Lilliudian natives.


Massive Gulliver proves his worth to his new insect sized hosts, after

initially imprisoning him for being a ‘beast’, by trashing an enemy

invasion force. Cue hero worship from the little people, who begin to

worship him – so Gulliver takes full advantage, getting them to build

him a luxury apartment, act out Star Wars plays for his amusement and

generally goof about (as Jack Black has been doing for his entire career).

woo the lovely Princess Mary (Emily Blunt), and a standoff against uptight

Chris O'Dowd's General Edward which leads to an unlikely transformers

who include Billy Connolly, James Corden and Catherine Tate. So for a film

the year, this is actually a fun cheesy kids film that passes the time in

a not too offensive manner.

"Emily Blunt - a princess worth wooing!"
Posted by Matt Adcock at 3:13 pm