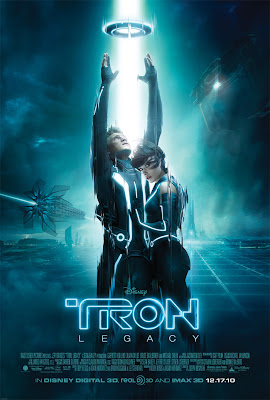 Welcome back to the ‘Grid’ – the digital frontier where clusters of information travelling through computers take the form of sky-running ships and’ light’ motorcycles. Circuits are the freeways and programmes exist as the populace of this fantastic digital world.

In 1982 the first ever human managed to enter the Grid – Arcade owner Kevin Flynn (Jeff Bridges) crossed into the computer and fought for his life with the help of a rebel security programme ‘TRON’ (Bruce Boxleitner). Now almost 30 years later Sam Flynn (Garrett Hedlund), the son of Kevin is drawn into the Grid – where he aims to try and rescue his father. But things have changed in the digital realm, a rogue computer version of Flynn named ‘Clu’ has taken control and is running a dystopian state. Indeed it is he who has actually drawn Sam into his world with a view of using him to break out into our ‘real’ world and take over… 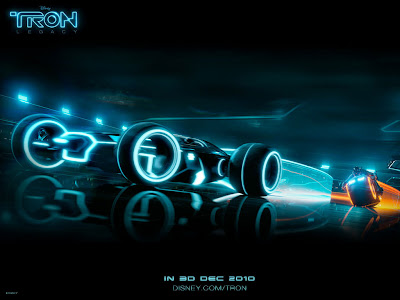 The original film TRON is widely remembered for being an innovative if cheesy sci-fi that set a new threshold for special effects and introduced the notion of gladiator battling with discs of light or fighting to the death (or de-resolution) on light-cycles which wove walls of light behind them. TRON: Legacy has its work cut out to up the effects ante again in this post AVATAR and Matrix cinematic world but amazingly the makers have managed to deliver something bold, unique and mesmerizingly new.

From the moment you see the stunning Quorra (Olivia Wilde) replete in a fetishist rubber combat suit pulsing with neon glow strips – who wouldn’t look out of place in one of the Matrix films – you know that you’re witnessing something very very cool. Everything has been seriously visually upgraded - TRON: Legacy is to the original TRON what the PlayStation 3 is to the ZX Spectrum. And that’s a good thing because whilst TRON: Legacy is awesomely flash, it is very hollow when it comes to the storyline. If you’re looking for anything meaningful of resonating this isn’t the movie for you.

Basically TRON: Legacy re- treads much of the same ‘battle to escape the Grid’ plot of the first film – just with different baddies (including a now evil TRON!?). But that doesn’t really matter when you’re caught up in the frantic battles, eye-melting visuals and pounding sonic soundtrack from Daft Punk (who also cameo).

TRON: Legacy succeeds in dragging the geek friendly franchise into the 21st Century – it’s a wild ride for sci-fi fans but probably won’t be remembered as fondly as the original.