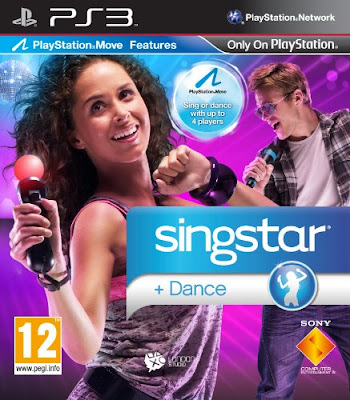 Gamers have different needs, some have to be shooting stuff (see Call of Duty or Killzone), others aren’t happy unless they’re burning along at over 200mph (see Darkmatters' Gran Turismo 5 review)… Then there are those who feel the need to dance and they can ‘Just Dance’ on the Wii, fling some controller less moves on ‘Dance Central’ on the Xbox and now get their groove on with SingStar Dance on the mighty PS3 - thanks to Sony’s excellent ‘Move’ controller.

Yep ever since the dance mat powered games hit the PS2 there has been an appetite for dance-related gaming, but up until now none of the offerings have successfully combined AAA karaoke with the ability to get jiggy in front of your console…

SingStar Dance changes all this and follows in the ‘we’ve got a fantastic product so let’s expand it’ thinking of SingStar Guitar by putting a Move controller in your hand and letting you dance your ass off, either while singing at the same time, just watching the original music video (with added dancing characters on the side for you to copy) or get down with your friends or family singing along to the words… 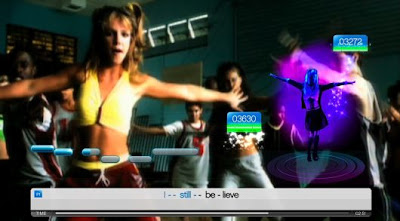 "Now you can 'pull a Britney'"
As the name suggests, singing is still the main business here and for the nice price of under £15 SingStar Dance (providing you’re already packing a Move controller - sold separately) and the new addition is the ability to score points by pulling off some moves. The singing is still absolutely boss, there isn’t a singing game that can hold a candle to SingStar – especially with its awesome SingStore that puts thousands of original song videos at your download finger tips in seconds, plus the brilliant chance to check out other players videos and vote on them – so things like the famous ‘dancing Wookie’ can get to number one in the chart!? There are other SingStar niceties like voice control of menus (which came before any of the competition did this) and quality wireless mics.

SingStar Dance keeps the mechanics nice and easy to follow – the video and lyrics play as always but now on the right hand side funky dancers appear which you have to mimic. The moves go from wiggles, waves, twists and all manner of variations – some easier than others. Of course you can see yourself performing instead of the original video if you fancy and if you do the Move controller even sparkles like a firework erm ‘sparkler’ when you play watching yourself dance with the PS Eye. You score points for how well you perform and it can be very satisfying to nail a perfect set of combos – especially if you’re attempting to sing at the same time!

Everything is very nicely presented, the menus are a dream to navigate (which makes this a much easier game to use in the party setting than the fiddly Kinect dance games) and you can even take requests and download the selected track (for a small price) so you’re not limited to the selection on the disc. There is also the option to watch back and edit the video of your dancing efforts before unleashing your amazing moves online for the wider community to vote on…

The track listing on the disc is diverse and includes Bye Bye Bye from N Sync, Shut Up by Black Eyed Peas, That’s the Way (I Like It) by KC & The Sunshine Band and more recent hits like Poker Face from Lady Gaga, or Don’t Cha from The Pussycat Dolls.

SingStar is the household name for music gaming on the PlayStation platforms and perhaps the ultimate ‘party game’. By Adding Dance to the mix it feels that Singstar evolves into a ‘must have’ for anyone who’s ever sung along to a track and wondered what they’d look like getting down to it too… The party season this Christmas is going to be fun!