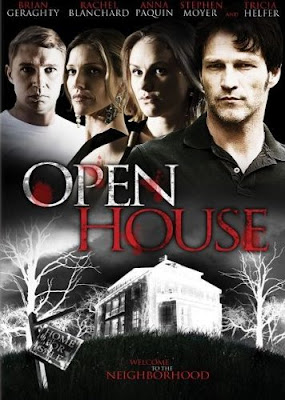 An ‘Open House’ is a house which is for sale and is open for inspection or tour by interested parties. But what if a psycho serial killer took the opportunity to sneak in while your house was being shown to prospective buyers? What if when the estate agent left, you were at the mercy of your unwanted new occupants?

This is the chilling premise for the nasty schlock-em-up ‘Open House’ from first time director Andrew ‘brother of Anna’ Paquin. Think minimalist horror in the vein of ‘Funny Games’ as viewers join the heinous David (Brian Geraghty) and Lila (Tricia Helfer) who take over the home of Alice (Rachel Blanchard).

David takes a bit of a shine to Alice though and so instead of chopping her to pulp – which is the fate of many other characters – she ends up being chained in the crawlspace and kept as a sort of pet. Although Alice’s being alive has to be kept a secret from the homicidal Lila because she wants to be the only woman in David’s life… 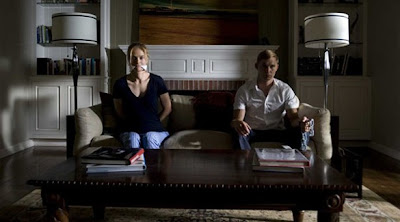 "David struggled to get people to watch him playing his Xbox Kinect"
Open House brings limited serial killer thrills with a few graphic knife murders which tip it into horror territory. Most of what happens you’ll see coming a mile off and whilst the cast do their best with the material - Anna Paquin pops up to support her director brother but she gets the chop pretty quick...

Of the killers, Lila is the more interesting - a hard-hearted killer babe who lures unsuspecting males to their death with her hot body. Overall there isn’t anything here that horror fans haven’t seen many times before in one guise of another and you’ll probably have forgotten this seconds after the credits role.

So no classic but watchable for some cheap n nasty thrills if that's what turns you on!?