Nic Cage enters the 'Season of the Witch' 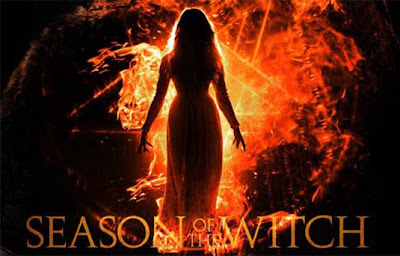 Season of the Witch

This supernatural historic witch-em-up could either be a cool dark chiller or a hammy waste of space... Nic Cage stars as a 14th century Crusader who returns with his comrade (Ron Perlman) to a homeland devastated by the Black Plague. A beleaguered church, deeming sorcery the culprit of the plague, commands the two knights to transport an accused witch (Claire Foy) to a remote abbey, where monks will perform a ritual in hopes of ending the pestilence.

A priest (Stephen Campbell Moore), a grieving knight (Ulrich Thomsen), an itinerant swindler (Stephen Graham) and a headstrong youth who can only dream of becoming a knight (Robert Sheehan) join a mission troubled by mythically hostile wilderness and fierce contention over the fate of the girl...

Check out this trailer to see what you think:

Email ThisBlogThis!Share to TwitterShare to FacebookShare to Pinterest
Labels: season of the witch