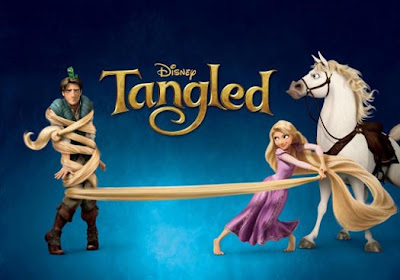 Tangled is a fun new Disney big screen fairy tale-em-up which blends cutting edge 3D CGI animation with an old school adaptation of the Rapunzel. So we have a young princess with her magical 70ft of golden hair, trapped in a secret tower by an evil old hag, locked away from the world – including her royal parents.

This is the first ‘traditional hand-drawn style’ Disney release that is strong enough to go toe-to-toe with the best that Pixar and DreamWorks Animations can produce. Tangled is a born crowd pleaser and it improves on the last Disney effort - The Princess and the Frog by a wide margin. My ten year old son surprised me actively wanting to see Tangled (he’s more of an A-Team kind of film fan these days) which is a testament to the power of a good marketing campaign. But despite my being slightly dubious, we came away having enjoyed a rip roaring sing along fairy tale, energised with a slick script and quality production values.

The only downside being that it all feels very familiar but that is because this is a strict addition to the classic Disney cannon. You know the tale of a young girl (voiced by Mandy Moore), having to come of age and decide if she will follow her heart when handsome and good natured thief Flynn (Zachary Levi) barges into her sheltered life. The basic Rapunzel’s story is enlivened here with a couple of nasty thieves who are after Flynn, a fun sidekick chameleon and a scene stealing horse named Maximus who is the character that stays in your mind most after the credits roll. 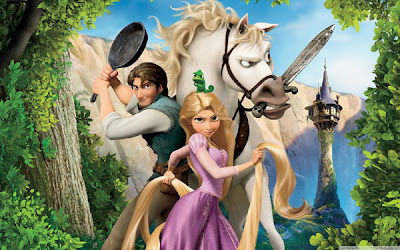 "Gotta love that horse!"
The computer animation continues to improve and it effortlessly blends the photorealist big-eyed characters with the primary coloured world. Stand out cinematic scenes include a jaw dropping dreamlike cascade of floating lanterns which ranks as one of the most unforgettable animated sequences I’ve witnessed. The 3D actually works well too – some of the younger members of the audience were reaching out and trying to grab the lanterns as the floated by which would surely please the animation artists.

What was most refreshing though was the lack of clever pop-culture references, bawdy humour or overt product placement. Tangled is a film that parents can take their younger kids to safe in the knowledge that it will deliver a fun, family friendly experience which is kind of what Disney has always been about surely?

Horror ö – mild threat more than anything too horrible

Babes ööö – Rapunzel is a looker