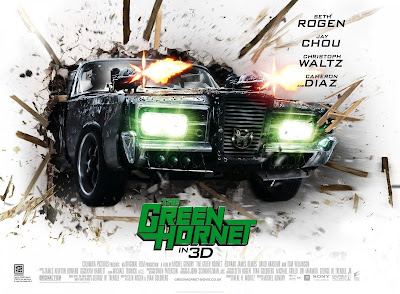 Following the death of his father, Britt Reid, heir to his father's large company, teams up with his late dad's assistant Kato to become a masked crime fighting team.

Check out the fun trailer below - followed by the Darkmatters full review:

What is the same mistake every superhero makes? They let the bad guys know that they’re a hero… That means that all the criminals have to do is threaten some innocent people and they have the hero by the short and curlies. This problem is addressed by millionaire slacker playboy Britt Reid’s (Seth Rogen) with his venture into becoming the crime fighting sensation ‘The Green Hornet.’ Letting the bad guys think that he’s one of them whilst taking them down is a nice twist on the traditional superhero formula. Of course the major downside of being seen as a criminal vigilante is that both the cops and the robbers are after you at all times.

The Green Hornet is a film from oddball director Michel ‘Eternal Sunshine of the Spotless Mind’ Gondry – it is certainly his most “mainstream” to date. Think Batman played for laughs in the vein of a buddy comedy or ‘The not so Dark Knight’ and you’ll be in the right area. Rogen is on good comic form in the lead role and or the action elements he is more than ably backed up by Jay Chou who stars as Kato, the Hornet’s all kicking, all punching, sidekick / car mechanic and awesome coffee maker.
Also on hand is Cameron Diaz who brings the love interest sizzle and quality master villain Chudnofsky in the form of Oscar winning Christoph Waltz who steals the movie with his ‘am I scary enough’ banter.

At heart The Green Hornet wants to be a cool flick like Kick-Ass but lacks the balls out action – so instead it delivers some nice fights, stunts and chases and lots of amusing banter. To be honest though, it isn’t enough to make this more than a fun diversion at best. It all looks very slick, especially the gadgets ‘star’ of which is The Black Beauty – the seriously cool militarised car which packs enough guns, missiles, cutters and flame throwers to make even James Bond green with envy! 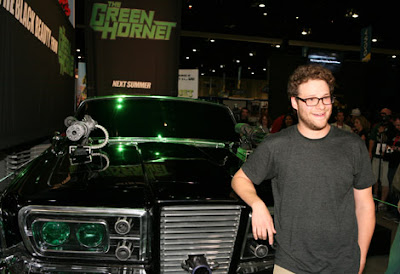 "The car is the star!"
Everything about The Green Hornet is machine tooled to try and please a wide spectrum of viewers and by doing this it manages to not really hit any targets satisfactorily. The 3D is unnecessary and adds nothing to the viewing experience here (as is becoming a worrying trend recently – it just feels like a ruse for extra cash to rake in by cinemas tut tut)…

The Green Hornet is disposable superhero fun, nice while it lasts by utterly forgettable.

Awesomeness ööö – wants to be cooler than it is

Laughs öööö – Hornet hits the spot on the funnies

Spiritual Enlightenment ö – money is the root of all evil (but post production 3D is a close second!)