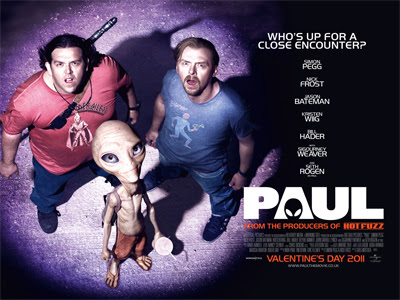 Prepare for some quality close encounters of the nerd kind…

In the beginning there was Spaced, it was a superb slacker TV comedy that fused sci-fi geekiness with laugh out loud comedy to winning effect. Spaced launched the comedy genius partnership of Simon Pegg and Nick Frost onto the world and it also paved the way for their excellent big screen films Shaun of the Dead and Hot Fuzz.

Now the dynamic duo reunite for a new comedy of intergalactic proportions - ‘Paul’. This is the tale of two average sci-fi nerd earthlings, Graeme Willy (Pegg) and Clive Gollings (Frost), who pick up a hitch hiker named Paul whilst trekking across America's UFO heartland. But Paul isn’t your average traveller – he’s a crash landed alien with a foul mouth and extra-terrestrial powers - who joins the guys on a bawdy road trip that just might alter their universe forever. 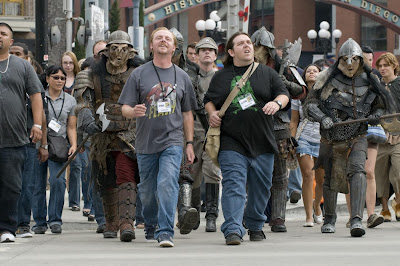 "The good, the bad and the nerdy - Comic-Con"
‘Paul’ is the ultimate fan boy sci-fi movie reference viewing experience, a love letter to every cinematic Martian adventure and close encounter we’ve had. From Star Wars through E.T. and Aliens – Paul is packed with dialogue lines, visual gags and nods of the head ripped from those classics of the genre.

Paul (voiced by Seth Rogen) has been amongst us for a while, he’s been trapped at a top-secret military base for the last 60 years. But it seems that his usefulness to them appears to be coming to an end and so he promptly escapes pursued by gun toting federal agents. Graeme and Clive are the unwitting humans who he picks to help him get back to his mother ship – and comic misadventure on a grand scale ensues. 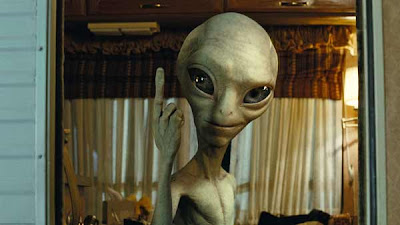 "We come in peace..."
Director Greg ‘Superbad’ Mottola brings a more frat boy feel to Paul and evokes a harder side to the comedy of his leading men than Edgar ‘Scott Pilgrim’ Wright did in Hot Fuzz etc. So it’s possible that you’ll be a bit offended by Paul if looking for the traditional Pegg / Frost vein of good natured comedy.

The special effects are great and Paul the alien is a masterpiece of CGI creation, fitting in superbly with the talented human cast which includes Kristen Wiig as a one eyed hill-billie bible basher love interest!?

Overall Paul is a triumphant blast – effectively pressing the inner nerd buttons and packing in more smiles per minute than any other comedy so far this year.

Awesomeness ööööö – take me to your leader
Laughs öööö – lots of quality laughs
Horror öö – nothing too grim
Babes ööö – Kristen Wiig is fair
Spiritual Enlightenment ööö – faith in a God who can love more than one species required!?
- - -
Second opinion - try Den of Geek

I've heard that the Pegg/Frost part of the movie is good but the Paul comedy is just a bit childish. Did you find that?

Yeah - as I said the comedy is cruder and more 'childish' in places. Still funny and very watchable, just not quite up to the heady levels of the Edgar Wright films!