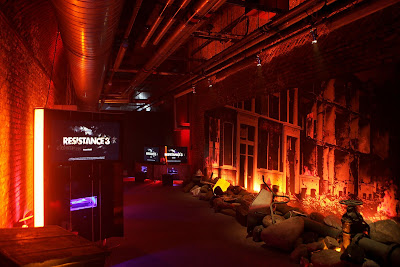 "Dare you enter?"
And Darkness Descended...
- A live action adventure experience based on the new PS3 game Resistance 3!?
Experienced by Matt Adcock 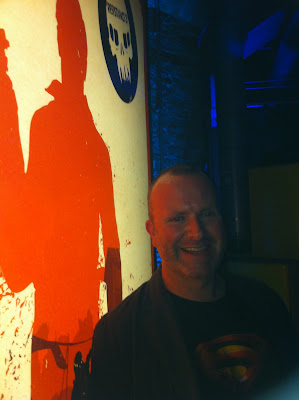 "that's the smile of a survivor!"
Sony are pretty cool when it comes to game launches and so for the third in the Resistance Franchise, PlayStation 3 have commissioned immersive theatre specialists, Punchdrunk to create a unique survival experiment fusing theatre and gaming.
So you get to 'be' one of the last humans alive, stumbling through a mutant creature infested film set that is designed to freak even the hardiest gamer out... It's one thing when facing alien creatures and mutated humans on a screen (with a virtual gun to keep them at bay) - it's another thing entirely when you have to try and sneak through a hellish medical lab filled with wailing wounded, in the dark, stalked by alien creatures, with no weaponry of any sort.
I had to quote Frost from Aliens: "What the hell are we supposed to use man? Harsh language?" but even harsh language (or screaming very loudly which seemed to be the tactic employed by the females in our group) didn't work on our flesh hungry foes...
We weren't allowed to take pictures 'in' the adventure either but I did manage to do a quick sketch (below): 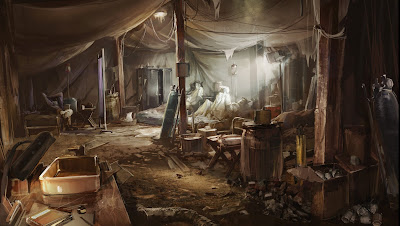 "imagine this but darker..."

The Waterloo Station Arches, are where the 'And Darkness Descended..." experience is hosted and  Playstation / Punchdrunk have done a great job in putting you actually into the prequel to the Resistance 3 game.
Our plucky group's mission was to get a code to some US survivors - the rules were simple, if you get touched by an enemy - you're out of the game (which sounds fine until you see a friendly marine being dragged off into the darkness by one of the enemy creatures)... 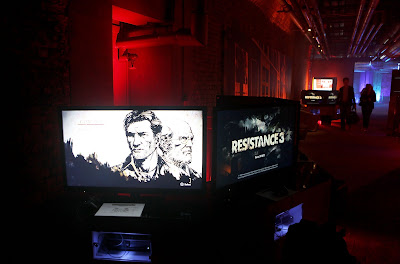 "Playing the game with a nice glass of red wine was for those who made it out..."
Things went a little nuts after we somehow managed to unlock an abandoned computer terminal and send our code message. We'd already 'lost' some of our group and so when a nearby door was broken open silhouetted in the red light was a freak-show alien - we few survivors ran for out lives - see below (where a helpful Sony PR guy took our photo): 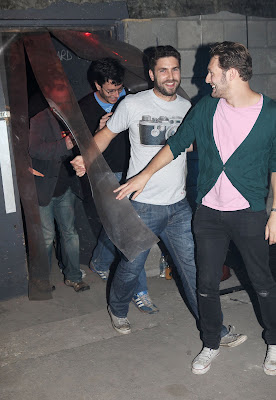 "the men made it out - led by the fastest / most cowardly green cardigan man, the women...
ah well, they're probably tastier for the aliens to snack on anyway!?"
If you're brave enough to want to try this experience, you can - find out if there are any placed left for Saturday 3rd and Sunday 4th September by emailing accesslive@scee.net stating your preferred date... 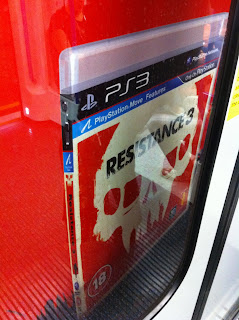 "They're everywhere - this pic taken on the Northern Line"
FULL DARKMATTERS REVIEW OF RESISTANCE 3 COMING SOON!
Posted by Matt Adcock at 3:36 pm

Sounds both awesome and terrifying!