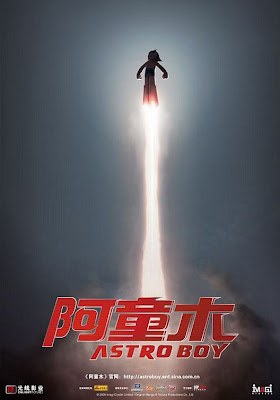 But wait, is that a couple of machines guns sticking out of his butt?

Wracked with guilt Tenma builds a replacement robot son incorporating the polar opposite energy ‘Blue Core’ which gives the new ‘Toby’amazing Iron Man like powers. But a robot cannot take the place of a real boy and he is banished to the scrapheap old world that exists below the idyllic future metropolis of Metro City.

Thus ‘Astro Boy’ finds his identity by helping the discarded and defunct robots he meets and learns to use his amazing abilities for good. The desolate scorched Earth filled with junk is very reminiscent of world of Disney’s ‘WALL-E’ and the film similarities don’t end there. In a great homage to ‘Gladiator’ there is a fantastic heavy metal death-match where Astro Boy is pitted against various metal killing machines in an arena, only to have both his ass kicking and his ‘noble champion’ circuits tested.

Astro gets support from some new human friends too – led by Cora (Kristen Bell) who finds it hard to accept him when she learns that he’s not a ‘real boy’… There are some supporting characters too like ‘Trash Can’ who is robo dog and the Robot Revolutionary Front, who include a walking fridge.

Heavyweight vocal talent is deployed even in the minor roles including Donald Sutherland and Bill Nighy. It is this and the genuinely engaging plot that kept both my sons rapt. They had only one complaint though which was that the final additional baddie felt ‘tacked on – just to set up a sequel’ – but it’s a sequel they’d still like to see!?

Overall, the film works thanks largely to its dazzling graphic and loving nod the character’s Japanese Manga roots. Astro Boy is a rollercoaster ride that has enough action, humour and political comment to keep both kids and adults amused. This is a great all round crowd pleaser – go Astro!!