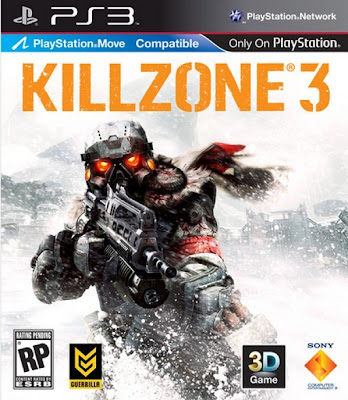 Now even with their evil leader ‘Visari’ taken down, we find that the war is far from over…

The Helghast forces are not beaten and are mounting a devastating counter-attack, the few remaining ISA are being pushed back to the point we must evacuate the planet of Helghan.

But if we have to go… let’s go in fine style and take as many of the enemy as possible with us – lock and load soldier!! 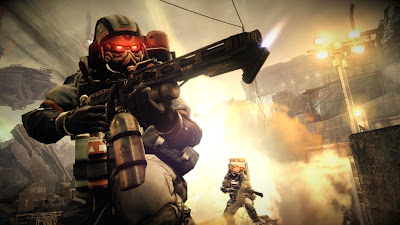 "don't shoot until you see the reds of their eyes"
Ok, so there isn’t exactly a shortage of fine First Person Shooter games, Call of Duty and Modern Warfare are mass selling master-classes of the genre, Battlefield Bad Company 2 brought tasty destruction of the environment into play. Medal of Honor got revamped with extra beards, Halo Reach continued its classy sci-fi warfare and newcomer Bulletstorm raised the level of insanity with ‘skill kills’. But as we wait for the promising looking Crysis 2 and the potential game of the year Battlefield 3 ...

There is only one game you need…

Killzone 2 was graphically superb but Killzone 3 surpasses it on every level – the levels range from article snowfields which boast the best incidental ‘snow effects’ of any game available through to steamy alien jungles. The industrial Helgan cities and bases return and have been brought to even more vivid life than in the previous games. Both the orange eye Helghast and the macho jock ISA characters are excellent with gorgeous detailing (the feeling of satisfaction when you shoot a Helghast’s helmet off and he turn round to frantically try and find it is immense).

Killzone 3 packs a mighty surround sound punch too – the fear inducing explosions rip from all directions, the screams of the injured and the barked orders of friends and foes echo convincingly around the beautiful battlefields. This game has quality voice casting also with screen legend Malcolm McDowell voicing evil Jordan Stahl and British legend Ray Winstone voicing Helghast Admiral Orlock. Having actors of this magnitude lends the cinematic cut scenes massive watchability and it is a joy to watch the baddie commanders squabbling amongst themselves in the power vacuum left by Visari.

I mentioned that Killzone 3 can be played in two ways – the trusty Dualshock 3 can be used with a Call of Duty button set up which will please fans of those shooters. The new way to play though is through the funky Playstation Move – this uses the glowing light ended controller to ‘look around / fire’ and the nav controller to move. For the most realistic control system out there you’ll want to invest in the sharpshooter peripheral which fits both the two Move controllers into a shotgun / rifle style rig (complete with pump action reloading). It’s just beautiful… Once you acclimatise to set up many have reported getting much better kill / death ratios with the Move controls!?

The main game campaign can be played in either single player mode or through co-op – very satisfying it is too working with a human pal to take down the enemy. It’s good but the campaign is only part of the Killzone 3 package and it’s not even the best part. The online multiplayer mode is where the real fun is to be had – refined and polished from the Killzone 2 online there are a decent choice of game modes including Guerrilla (Team Deathmatch), Warzone (which cycles through different objective based games) and a brilliant ‘Bot Zone’ where you can hone you skills against the A.I. opponents.

Kills and feats will give you points to spend on new abilities and weapons – and the upgrades are very very tasty so it is worth going for them as the gameplay just gets better with each new weapon or skill e.g. the sniper ‘Marksman’ can unlock a powerful Machine Pistol as a secondary weapon which has a ferocious rate of fire…

Overall Killzone 3 is delicious, addictive multiplayer deathmatch perfection… And if you have a 3D TV, this game will show it off like nothing else around. Every gamer on planet earth who has ever enjoyed a shooting game should witness the sheer brilliant carnage that Killzone 3 delivers – there is no substitute!! 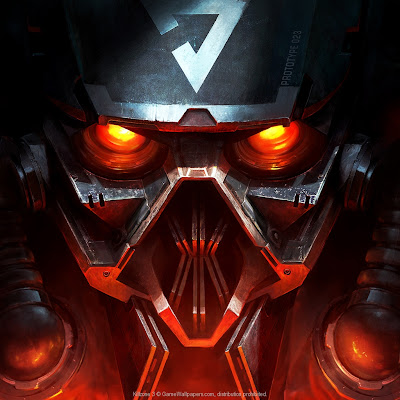 "David Cameron's recreation mask"
Out of a potential 5 you have to go with a Darkmatters:

Previous love for Killzone 3 on Darkmatters:

"If Killzone 3 was a woman in would be Emma Watson"
You can also read this review over at funky Irish site FRANK THE MONKEY
Posted by Matt Adcock at 11:02 am

I've been dubious about getting the PSmove but this game might convince me. I really like the idea of sprinting around the battlefield with the move controller - popping off heads like a pro.

Yes, I do have a 3D TV and KZ3 is awesome! The way the first person camera works in most games is you feel like your a robot not a person running around with a gun floating in front of you, but not in Killzone 3.It’s completely different and that makes you feel like your in the action. Any time you’re picking ammo out of a crate or climbing a ladder or doing a melee attack. It actually looks like your doing those things. I’ve been reading reviews on this game for quite sometime and from what people say, it’s not that bad so I added it to my Blockbuster@Home queue. I found out about Blockbuster@Home because I work for DISH and decided to take advantage of the free trial and pickup Killzone 3, this game is something you can't appreciate till you see it.