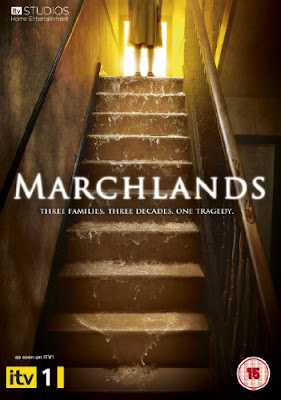 Thank you for your interest in this lovely large Yorkshire house. As I’m sure you’ll agree, ‘Marchlands’ has a lot of character – unfortunately it’s seen a fair share of unhappiness but let’s not dwell on that.

If you do feel a chilling supernatural presence or see a spooky little girl that isn’t actually there – please don’t worry, I’m sure it’s nothing to worry about… Unless…

Marchlands is a classy ghost story about a little girl named Alice who haunts the big house that is home of three families who live in it across three time periods (1968, 1988, 2010). The one thing that links them all is Alice and her untimely death.

What follows is a gripping drama follows the events as the various repercussions of the unsolved mystery of Alice's death and why her spirit is still freaking people out in Marchlands. 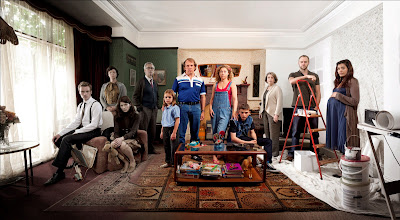 "Residents of Marchlands through the years"
The production values are excellent (which I’m sure isat least partly thanks to Warner Brothers investing for the first time in British TV). ITV have surpassed the normally untouchable BCC with Marchlands – a mystery thriller that delivers more frightful thrills than any number of Paranormal Activities and features a fantastic cast including Alex Kingston (Moll Flanders), Denis Lawson (Bleak House), Jodie Whittaker (St Trinian's), Anne Reid (Ladies of Letters), Shelly Con (Mistresses) and Tessa Peake-Jones (Only Fools and Horses).

The enthralling story of the three families linked across three decades as they live in the remote house is very well put together. The plot jumps in time effectively but never confusingly and builds up a delicious slow burn which pays off in a satisfying climax.

It is better to go into Marchlands not knowing all the ins and outs of the characters in each generation, so for maximum viewing pleasure don’t go reading up on the plot beforehand. Credit must go to the makers for reinvigorating the haunted house genre without relying on too many clichés.

Special props should go to the young Sydney Wade who plays ‘Amy’ – another 8 year old girl who comes to live in Marchlands and who becomes ‘friends’ with the dead Alice. Hers is a key role and Wade marks herself out as a child actor with a big future thanks to a gripping depiction of a troubled child.

Alice isn’t the only ‘ghost’ in Marchlands as the skeletons and demons of past actions tumble from the closets of various characters… Who will survive emotionally and what will the dark secret behind Alice’s death mean to those across the generations?

Marchlands sets the new high benchmark for TV horror-lite. It carries the torch of the old Hammer Horror shows and delivers an unsettling miniseries that will suck you in and chill your bones. Highly recommended for those who like it when things go ‘bump’ in the night…

(4 - just the right balance of spook-em-up and mystery thriller)...

Might give this a look seeing as I can now get the ITV player on the PS3 (haven't had a reason to use it before, theres only so much Jeremy Kyle one man can take).