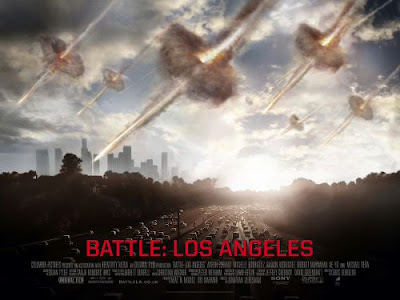 If there is one thing that Hollywood teaches us it’s that when tooled up alien invaders turn up and begin systematically wiping us out – the people you really want in your corner are U.S. Marines. Battle: Los Angeles is all about man vs aliens – told from the point of view of a bunch of Marines who risk everything to save some civilians trapped behind enemy lines.

Splashing impressive special effects, Battle: Los Angeles paints a pretty bleak picture as to earth’s capacity to repel invaders and packs in a huge amount of peril and threat for a 12a rated film. This is basically a cinematic hybrid version of two classic shoot-em-up PlayStation games namely Call of Duty crossed with Resistance: Fall of Man (look out for the massive billboard for Sony’s Resistance 3 which arrives later this year in one scene).

We join Staff Sgt. Michael Nantz (Aaron ‘Dark Knight’ Eckhat), a soldier whose last mission didn’t go so well, leading to most of his men getting killed. He is tasked with leadings a small team of Marines into the occupied area of Santa Monica – an area that has been devastated by the evil alien exterminators.

Think ‘Black Hawk Down’ just with angry armoured extra-terrestrials instead of Somali soldiers and you’ll have some idea of the non-stop against the odds action that makes up most of the screen time. The deafening interplay of large caliber guns being answered by the sonic booms of the advance alien weaponry is the constant backdrop to the macho goings on. Who, if anyone, will survive is the only variable factor as the team battle valiantly to save some cute civilian kids and token multicultural clichéd characters.

Battle: Los Angeles is a pure boys own movie – a fact backed up by my eldest son who turned to me as the end credits rolled and said “I could happily watch another two hours of that!” Don’t be expecting any real character development or deep exploration of meaningful issues – just sit back and enjoy the alien carnage and untold battle mayhem.

The effects team has created some of the best alien special effects to grace the screen since AVATAR (even though Colin and Greg Strause jumped ship midway to direct the lesser sci-fi work ‘Skyline’).

Battle: Los Angeles is loud, dumb and action packed, so if that’s what you’re in the mood for – step up and join the fight!
Out of a potential 5 you have to go with a Darkmatters:
öööö 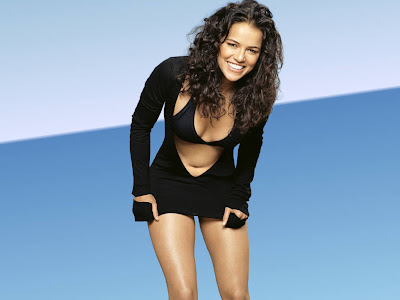 Rodriguez looks good out of combat gear too"
Posted by Matt Adcock at 4:11 pm

In my opinion this is a good game. But i`m a big fan, so my opinion is not so conclusive.
Anyway good job with this review.