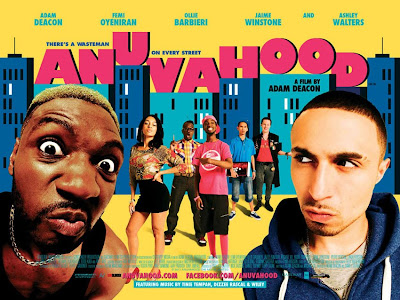 This is a Hype Review Ting for ANUVAHOOD.

Step to this urban comedy people cos ANUVAHOOD is on the streets of the UK innit and it be the debut movie from Adam ‘KIdulthood’ Deacon who like wrote, directed and acted this sucker.

ANUVAHOOD is a new youth-em-up take on the gritty existence of urban teens on London’s mean streets – this time though, along with the requisite gangsta posturing, violence, drugs and yoof speak, it is mainly played for laughs.

Featuring the so called life of young Kenneth (Deacon), a wannbe MC who likes to be called ‘K’ and thinks that he’s a ‘Badman’ but in fact is a smalltime loser working at ‘Laimsbury’s. He can’t get a woman, his seven year old sister disrespects him and his mix tape CD has made him just £3 to date.

K hangs with a ‘wasteman’ crew that include hyperactive T.J. (Jazzie Zonzolo), straight talking Bookie (Femi Oyeniran), PlayStation loving Lesoi (Michael Vu who co-wrote this with Adam Deacon) and Spanish exchange tripper Enrique (Ollie Barbieri). This misfit crew live in fear of local psycho Tyrone (Richie Campbell) who compared to K is a proper Vex Badman and who takes every opportunity to jack those he meets on the estate.

If K ever going to make his dreams of musical tings come true he’s going to need to find a way to help his parents pay their rent, get some links and avoid getting shanked by the rival crews.

"The sex scenes are all that and more..."
We’ve seen youth council estate hardship a lot recently with the excellent Fish Tank and Harry Brown but whilst nothing in ANUVAHOOD is overly original (which is what comes of riffing so strongly on Noel Clarke’s Kidult and Adulthood films – look out for cameo from Jaime Winston) it does manage to be fresh and funny in places.

In fact Deacon delivers a ‘jokes’ film on a small budget – and handles the film’s transition from initial slapstick humour to a much darker gun crime and crunchingly violent climax well.

ANUVAHOOD has been attracting love and hate in equal measure – it seems to split along an age divide but if you ‘accept it’ then there’s much amusement to be had. The screening I caught this at was completely sold out which shows that there is an appetite for street level laughs.


Awesomeness ööö – get down in the hood

Laughs öööö – it's Jokes all the way

Second opinion - try MTV who gave it 4/5 and said: "If you’re looking to escape the harsh realities of the gritty hood movies of the past and don’t mind a bit of cheesy, over-the-top cheeky banter - then ‘Anuvahood’ will be right up your street (pun intended)."