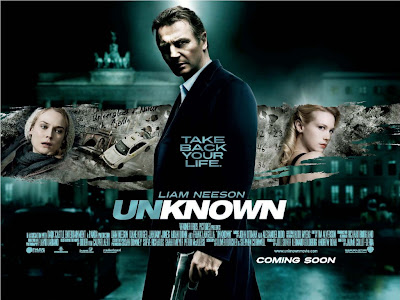 Do you know what it feels like to become insane? It's a war between being told who you are and knowing who you are... Which do you think wins?

My name is Doctor Martin Harris, you’ll never guess what happened to me when I went to Berlin for a biotechnology convention… I’d left my briefcase at the Airport and I had to grab a taxi back – only en-route we were involved in an accident and I was knocked unconscious.

Four days later when I awoke from my coma I found that I wasn’t the man I thought I was. My lovely wife Elizabeth (January Jones) no longer recognised me and to make matters worse some other guy (Aidan Quinn) is claiming to be Doctor Martin Harris!? My only hope of proving that I am not crazy and that sinister things are afoot is to track down the taxi driver Gina (Diane Kruger) whose cab I was in.

Or am I mad? Maybe there never was a Martin Harris? Or perhaps this is all an evil plot and I’m going to have to fight to prove myself.

What would you do to try and take back your life? Surely there’s nothing more worth fighting for… And fortunately fighting back is what this Martin Harris (Liam Neeson) does well. Adopting his ‘Taken’ hard man persona Neeson kicks copious amount of butt in his quest to get to the bottom of what exactly is going on. Car chases, gunfights, beatings and danger lie around every Berlin corner… Director Juame ‘Orphan’ Collet-Serra wants to deliver a Bourne meets Bond actioner but is hamstrung by having to keep the material with the boundaries of a 12a rating. So what could have been a wham-bang crunching cinematic adventure becomes a watchable but unremarkable lightweight dose of low level mystery and thrills.

Unknown doesn’t bring enough new or anything remotely shocking once you get on board with the plot. You can tick the boxes of cinematic ‘tried and tested’ elements including the plucky friend of the hero’s saviour with a short life expectancy, an old-school spy ally, a sinister agent that might not be all they seem – BINGO you’ve got a by-the-numbers action thriller.

As I left the cinema having watched Unknown with my lovely wife, we overheard several people saying the same thing… “It was ok, just not as good a ‘Taken’” and that’s a fair summation.

Horror öö – not very grim at all

Spiritual Enlightenment ööö – your life is worth fighting for!
- - -

It seems quite OK. Liam Neeson is always kinda guarantee for a good movie,however sometimes he is able to cause a decent disappointment. ...and, the mentioned miss January ...mmm...Jones. We have to check this new bloom of the rotten Hollywood.
...and, yes, I almost forget. If anybody curious on quality game reviews, just, take a look at http://gametoplist.blogspot.com/. :-)