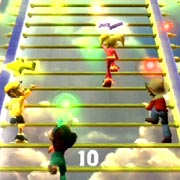 "Jacob's Ladder for a Playstation generation"

This year a little known prophecy from the book of 'madedisup' will come to pass... In particular the passage:
"And the Lord finished Grand Theft Auto: San Andreas with 110% for the tenth time and thought 'why isn't my best selling book on the PS2?' And low some developers named Crave Entertainment did heed the word of the Lord and create The Bible Game..."
The Bible Game for PlayStation 2 is not a recreation of The Passion of the Christ or a 'convert your neighbourhood' simulator but rather casts players as contestants on a Biblical game show with fast-paced, “beat the buzzer” action and a comical off-screen announcer as emcee.
There are also 20 mini- and micro-games with 1,500 questions reinforce inspirational Old Testament teachings such as Jonah and the Whale, David and Goliath, The Tower of Babel, and many more. Multiplayer mode for up to 4 players encourages family members of all ages to play together, and provides a fun alternative for family game nights... That could mean slaying Goliath, surfing the whale spume and stoning adulterers in 3D? But it doesn't sound like you get a 'free roam' mode where you can approach strangers and ask if they want to know your friend Jesus who loves them - which I'm a bit disappointed about!!
Crave President Rob Dyer said: "I don't want to have a game that makes you feel like you're going to church, I want you to have fun playing it on a Saturday morning."
There will also be a version for the Game Boy Advance which combines action/adventure play style with trivia challenges. In their quest to protect the Armour of God, players may choose to play as either Billy or Jenny across seven levels including forest, snowy tundra, desert, and tropical island environments. Along the way they must answer questions from both the Old and New Testaments. Either the New International Version or King James translation may be selected, and three levels of difficulty keep the game accessible for all ages.
Please pray that The Bible Game gets realeased in the UK at some point...
Posted by Matt Adcock at 7:56 am