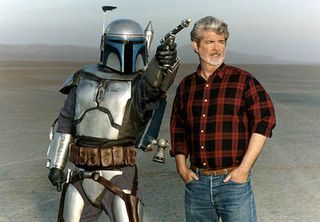 In a galaxy far, far away, well London, the room grows still, a palpable sense of anticipation is almost causing electric Force power to crackle off the walls, I hold my breath and then… in walks George Lucas, the Jedi Master himself. Star Wars has made more than $12.4 billion from box office takings and merchandise, sold over 130 million videos and been responsible for bringing sci fi to the masses like no other film saga. Now the final prequel ‘Revenge of the Sith’ is playing to packed cinemas the world over – I ask him how much pressure did he feel trying to deliver a final Star Wars film that would meet expectations?
Lucas: “Ultimately I had to just try and to make the movie that I started out to make. Fortunately the whole thing was written, the story was done and the style was decided before the first Star Wars film was successful. Of course Star Wars was always designed to be the tragedy of Darth Vader.”
Vader is certainly a firm favourite in my household (I didn’t call my son ‘Luke’ for nothing) but which character from the 6 films in the Saga is most like you?
Lucas: “I would say probably Luke. That's where it started and he's a poor farm boy like I was, who went off to fight in the Galactic wars!”
And which episode was your favourite to make?
Lucas: “These films are like my children, so don’t ask me which one I like the best. But the first one is always the toughest one because you don't know what's going on, you're confused, it's up to this poor little baby to teach you how to be a parent, and you have to learn as you go. Everything is a drama, you worry about every little thing and it drives you nuts… Especially when they turn into teenagers! But by the time you get to the last one, it's really a piece of cake, because you've been through it so many times. So the last one is the one that gets spoilt because it’s going away… and the last one was definitely the easiest to make.”
Now Episode III is the done, the Saga is over, do you have a sense of loss?
Lucas: “No, it's more like having your kids go off to college. You know, they still come back when they need money and they'll be there for holidays. And we are doing two TV series’, an animated series about the Clone Wars, which has all the characters in it, but obviously there's not much character arc. And another one will be a live action series featuring minor characters from the saga. So Star Wars is still going to be around. I'm going to go off and do my thing. It will have a life it’s own – through the comic books, novels and games that are out there. I just reserved the theatrical arena for this saga."
What about your next film projects?
Lucas: “Well 'Red Tails' is a story about African-American fighter pilots during World War II. They were the only fighter unit during World War II that never lost a bomber because they were escort fighters. So they were like, the best It's a really exciting story which I've been working on that for about 15 years and now I'm going to focus on it, along with the next Indiana Jones.”
Red Tails certainly sounds like one to watch and it’s excellent to hear Indy is on his way back. But for now the only thing you should be worried about seeing is Revenge of the Sith because Lucas has saved the best for last, remember the Force will be with you, always…
Matt's Full Review: Revenge Of Sith
My Immediate Reaction and photo with Stormtroopers
Was Jesus A Jedi?
Link to other Star Wars Darkmatters posts inc. Darth Vader's Blog!!
Posted by Matt Adcock at 10:45 pm

- this guy's putting us on, right?

I want your job. That would be fascinating to sit down and talk with George Lucas.

Would you suggest a journalism minor to augment my finance degree? ;)

I did hear somewhere that he had all of the episodes already written before the first one (episode 4) was released.

I really like how it was done because you just pretty much hate darth vader in 4-6 and then you get some compassion for the man in the dark suit in 1-3. I love how it was done!