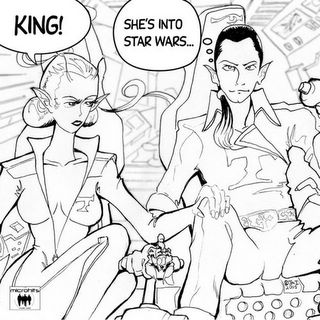 Riding on the massive Star Wars hype machine that is gobbling up money from fans across the globe comes a new song that smacks of – “cheap cash in”. But if you click this link from theflyguy.blogspot.com
She's Into Star Wars
you might be as surprised as I was to find out that it rocks!!

Yes, some dude called ‘King’, a former backing performer and collaborator with groups like Outkast and No Doubt, is embarking upon a solo career "with a mission to take hip-hop, rock and pop to the next level." His style is woven together with threads of spacey hip-hop, straight pop, alternative rock, and spoken word, he had a big part in Outkast’s multi-platinum album “Speakerboxx/Love Below.”
If you like this track – then there will be an EP out later this year, in the mean time you can probably find She’s into Star Wars on Itunes, Rhapsody, and Napster…
Posted by Matt Adcock at 7:45 am

Yeah, that song does rock. the song is actually starting to get airplay here in los angeles. Definitely not simply cashing in, it's the best star wars related song since John Williams composed the piece for the awards ceremony at the end of episode IV.

Cheezy Sexy Cool. Cute anime. Do you have a real pic? The ladies of Atlanta demand to know if King's as SEXY as his voice.

Oh, Shit!I saw King the other night in the Outkast Roses video, He's such a hottie.

Did anyone else see King doing body shots, of some busty Blonde in Shelter last Saturday night? I'm so jealous

i totally could not believe that i talked to him and i never knew he was kinda big...>.>

hey, thanks for the link!
FLYGUY

Oh my gee! xD
He's my mum's boyfriend. I live with the man during the holidays! xD
Sheezus. I can't believe he's this popular, I though he was a dork! Lawl.